Cutting edge platform makes Prius more fun to drive, but it's also more eco friendly than ever before

Fundamental to the Prius is Toyota's TNGA platform that has also been seen in the C-HR SUV and Corolla hatch. Due to cost savings in rolling out the same platform to various models, Toyota has been able to invest in making it extremely hi-tech from the outset.

One of the biggest benefits is that this platform is more dynamic, giving the Prius an agility on the road that previous models could only ever dream of. It’s backed up with light steering that gives more feedback and accuracy than previous Prius models, strong brakes and less body roll.

Don’t go thinking the Prius has become a sporting saloon or hatchback like the BMW 3 Series plug-in hybrid or Volkswagen Golf GTE overnight, though. It’s still noticeably lagging behind those cars, but it is a vast improvement on the soggy handling of previous Prius models. The Prius steers sweetly and rides with composure. Part of this is due to the smaller 15-inch wheels, but the chassis set-up also feels softer without compromising grip or dynamic ability.

The Prius Mk4 is also more refined to drive than before thanks to increased sound insulation, a new CVT (continuously variable transmission) gearbox that doesn’t ask the engine to rev as much as before, and the hybrid system spending more time running on silent electric power. 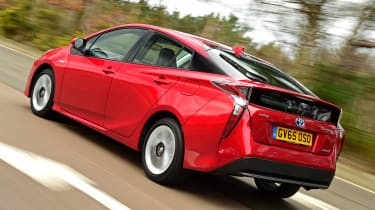 Around town the Prius often uses electric power alone to zip around the streets, but head outside of the city, and the petrol engine kicks in. The transition between electric and petrol power is near silent with only the real noise intrusion into the cabin being from the super-eco tyres.

Like the last model, the Prius has three distinct driving modes – ‘normal’ gives a suitable balance between fuel economy and throttle responsiveness; ‘eco’ optimises the powertrain and air conditioning to save fuel; while ‘Power’ mode gives more acceleration.

Like the standard Prius, the Plug-in is based on the brand’s TNGA architecture and has a transversely mounted 1.8-litre petrol engine hooked up to an electric motor, both of which drive the front wheels via a continuously variable transmission. Elsewhere, Toyota’s new Dual Motor Drive allows the car to use the hybrid system’s generator as a second motor when extra power is needed. The lithium-ion battery is under the boot floor and weighs a hefty 120kg.

The strut front suspension and double-wishbone rear axle are carried over, but the springs and dampers have been stiffened to cope with the extra weight, plus there’s a thicker front anti-roll bar. Despite the suspension changes, the Plug-in doesn’t handle as sweetly as its hybrid cousin, particularly during sudden direction changes, where the weight of the battery pack in the rear upsets the car’s composure. However, take things easier and the Prius feels more composed, with well weighted steering and decent grip from its eco tyres.

On the motorway the PHEV delivers a supple ride and low wind noise, but around town the stiffer suspension results in more bumps and jolts being felt.

As in the old model, the Prius’s hybrid system features a 97bhp 1.8-litre VVT-i petrol engine. However, the unit has been re-engineered to deliver significantly better fuel economy. 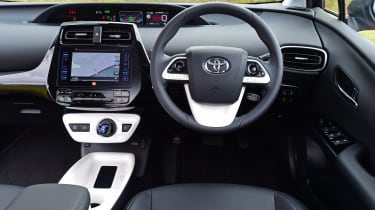 The combined petrol engine and electric motor power output is 121bhp, allowing the Prius to cover the 0-62mph sprint in a reasonable 10.6 seconds. City driving is where the Prius is most at home as it can rely upon its electric motors adding zip to its performance, but it’s less comfortable at high speed. On the motorway, for instance, overtaking acceleration from 50 to 75mph takes a slow 8.3 seconds, while the top speed is only 112mph.

The Mk4 model is also the first Prius that can pull a trailer – it has a 725kg towing capacity (braked and unbraked).

Part of the problem with older versions of the Prius was that the CVT gearbox sent the engine revs sky-high when you tried to accelerate. With a bigger boost from the electric motor to help out in this current car, and a more advanced gearbox, the unit doesn’t give that ‘rubber band’ elastic feel as you work the accelerator.

A more refined engine also means that the Prius’s power delivery is smooth, and the lack of gears ensures there isn’t a noticeable step in the delivery, merely plenty of smooth torque. As a result, the powertrain always feels one step ahead of what you’re asking for.

The Plug-in Prius uses the same petrol engine but has a bigger battery capacity - and thus a little more weight. That means that while it can travel for longer on electric power alone (after being plugged into a socket), it is slightly slower off the line by half a second.

Thanks to the well integrated electric motors and CVT box, the Prius Plug-in has no trouble keeping up with traffic. Apply the throttle gently and it uses battery power to seamlessly assist the petrol motor; stamp on the pedal and the box sends the revs soaring.

We managed 28 miles on a full charge when we tested the Plug-in model, which is 11 miles short of Toyota’s claims. Crucially, you can use the driving modes to retain charge in the battery, which will be useful if you have a journey that involves some motorway miles followed by a drive across a city.

In pure electric mode the Prius pulls strongly and can cruise up to a maximum of 84mph. Better still, when the cells are depleted the transition to petrol power is smooth and quiet.