Prius has a strong reputation for reliability - and we expect the new car to maintain this. There's also a raft of safety kit as standard

The hybrid powertrain sounds complicated to the uninitiated, but the Prius has been around since 1997 and similar hybrid systems have been used in a raft of other Toyota and Lexus models for many years, so it's been developed and improved upon with every new model it's been used in.

In that time the technology has proven itself to be incredibly reliable and any worries about the batteries will be put at ease by the fact that some of the very first Prius models are still going strong. Moreover, the Lexus IS – which uses a near identical hybrid system as the Prius – came out on top in the 2015 Driver Power survey.

Toyota has always had a strong reputation for reliability, but the brand slipped from eighth to 16th overall in our Driver Power 2016 satisfaction survey. Its dealer network recorded a good result of fourth, too, with owners rating highly the level of service they received. 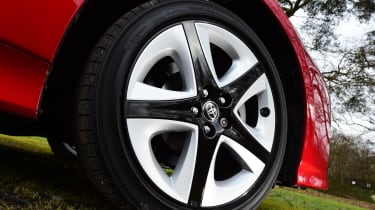 The Toyota’s list of safety kit is extensive. All Prius models come with seven airbags and Toyota’s comprehensive Safety Sense system, which is comprised of radar-governed adaptive cruise control (which maintains a safe distance to the car in front and can even bring the Prius to a halt if necessary), pre-collision brake assist, lane departure warning, automatic high beam, road sign and assist. ‘Business Edition’ models also get a blind spot monitor and rear cross traffic alert, while ‘Business Edition Plus’ and ‘Excel’ get park assist. All of this helped the Prius achieve an impressive five-star Euro NCAP safety rating in 2016.

Like all Toyotas, the Prius comes with a five-year, 100,000-mile warranty. There's also a separate five-year warranty for the hybrid system; a 12-year anti-corrosion and perforation warranty and a three-year paintwork and surface rust warranty.

For the Prius, you can also extend the five-year hybrid warranty by an extra year or 10,000 miles (which ever comes first) and this can be renewed up to the 10th anniversary of the car’s registration with no limit on total mileage.

Toyota offers a range of service packs for its models, as well as fixed-price servicing which really helps those on a tight budget. The Prius also gets a free hybrid system check with every service.

Toyota’s dealers also finished eighth in the 2015 Driver Power survey with the brand getting an 86.97 per cent rating, so you’re in safe hands.