The main reason you would buy a Prius is that it’s a hybrid and, in theory, a hybrid equals great running costs. The Prius certainly delivers impressive mpg and emissions figures, although the latest WLTP tests have pegged the official figures back. Originally combined economy wasclaimed at 94.1mpg on cars with 15-inch wheels while 17-inch alloys return a claimed 85.6mpg. These figures are now 68.4mpg and 59.6mpg respectively. That's more of a reflection of the new test structure putting an emphasis on driving with the engine running rather than the Prius doing anything badly, and these figures are more likely to be achieved in everyday running than the older NEDC consumption figures. 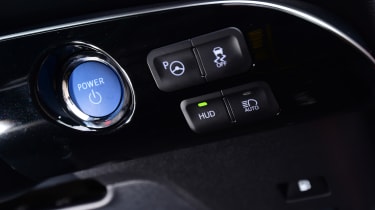 Whether you’ll reach anywhere near those claimed economy figures will depend entirely on how and where you drive your Prius. The Prius is a common sight in big cities, and this is the best environment for the car.

For those who commute mostly in and around the city, you should be able to hit in excess of 70mpg if you are light with the throttle and use EV mode often. However, if you use a lot of motorways or fast A and B-roads, you’ll be looking at around 50mpg.

The Prius features an EV button, but there’s not much point in using it. Toyota admits this function is a hangover from the first hybrids, with the US market wanting an all-electric mode at the touch of a button. The Prius boosts efficiency by using electric power to support the petrol engine, rather than replace it, so it’s best to let the software intelligently manage the switch between the two modes.

Long-term running costs have been particularly good on older Prius models and the latest one should be no different. The Prius has earned itself a reputation – especially from fleets – for being cheaper to run than conventional cars in some cases.

Due to it being a hybrid, owners have reported replacing fewer consumable items like brake pads compared to normal petrol-engined cars, while the fringe benefit of Toyota's rock-solid reliability is also a major factor in these low running costs.

If you’re after the ultimate in fuel efficiency, though, the regular Prius can be trumped - and in some style - by the Prius Plug-in. It uses lithium-ion batteries to store more electricity for the car’s systems, and can therefore travel for up to 30 miles without firing up the combustion engine at all. That makes it a perfect tool for those who spend most of the week driving around town, but who need to make longer journeys from time to time.

There’s no denying the benefits of that larger battery, too, because it plays right into the hands of the official fuel economy and CO2 tests. In the old tests, the Prius Plug-in returned 283mpg and 22g/km of CO2, but under WLTP tests these figures are now 235mpg and 28g/km. Whichever figures you use, it must be said that you’ll have to drive in a very specific, gentle fashion if you’re to get close to matching those fuel consumption numbers in the real world.

If you're intent on maximising your fuel economy, the Plug-in can be upgraded with a solar roof panel that can keep the battery topped up. However, it's only available on Business Plus models, and you lose valuable safety kit such as the head-up display, blind-spot monitoring and rear cross-traffic alert.

Regular use around town, on a full charge, should yield 100mpg quite easily, however. A bigger problem could be the latest VED rules, which see the Plug-in charged the same road tax as the regular Prius, eliminating some of the long-term ownership appeal of the plug-in model.

Our experts have calculated residuals of 52-53 per cent for the regular Prius. It’s also expected in the next three years once the Prius has entered the used car market, second hand prices will be high in cities like London as the Prius is viewed as a favourite amongst minicab and private hire businesses. Go for the Plug-in model, and residuals are slightly poorer at 48 per cent.