Larger on the inside than previous Prius models, the latest car is spacious and comfortable

Storage is decent in the Prius. The white tray in the centre console is a good place to store smartphones, and in ‘Business Edition’ models and above this tray adds an induction phone charger, so you can place a compatible device there to charge up without having to plug it in. The glovebox is large enough for a one-litre bottle of water, and under the armrest between the two front seats is a large cubby that can store all sorts of things like sweets and other paraphernalia. 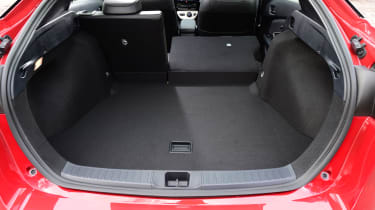 It’s spacious up front thanks to plenty of headroom and a dashboard that sits away from the driver. In the back, however, while kneeroom is good and you can fit three people at a squeeze, headroom isn’t the best. This is due to Toyota relocating the Prius’s battery from the boot to under the rear seat. Consequently the rear seats sit high, and when combined with the sloping roofline, this means headroom is reduced. It’s a shame Toyota didn’t think more about this, especially given Prius’s popularity with private hire drivers.

With just 191 litres of boot space, the Prius Plug-in is way down on that offered by its standard hybrid sibling and the 341 litres in the Ioniq PHEV. That deficiency is due to the enlarged battery pack that takes up space under the boot floor, and although there’s a little flap to store the charging cables, this impact on practicality is disappointing for a family car.