Return of the GSi badge with petrol power is a success, but its high running costs spoil the fun a little 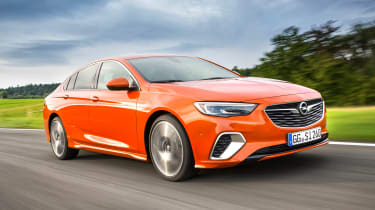 After 20 years, Vauxhall has re-awoken the GSi badge – and with great success. Its sweet chassis and punchy powertrain make the Insignia a fun car to drive, while the strong kit list, very comfortable seats and roomy cabin ensure it’s a model you could genuinely live with every day. The GSi appears to offer more in petrol form than it does as a diesel, but beware: those lofty running costs and high emissions could be crippling in the long run.

Vauxhall’s GSi brand is back. We first drove the diesel Insignia GSi in Sport Tourer guise last month, but this is our first chance to try the petrol-powered hatchback, which will be in UK dealers in a few weeks.

The 257bhp 2.0-litre turbocharged engine is nothing new; it’s been available in the Insignia Grand Sport since its launch last year. Like in the diesel GSi model, it’s linked to an all-wheel-drive system, and an eight-speed automatic gearbox.

In the transition from Elite Nav to GSi, Vauxhall has given its big family car deeper bumpers front and rear, along with huge 20-inch wheels, bolted-on side skirts and a subtle rear spoiler. 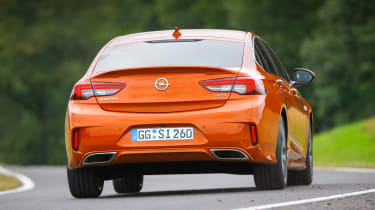 So what’s it like to drive? It’s not as powerful as the previous-generation Insignia VXR Supersport, but because the car is more than 100kg lighter, Vauxhall says it’s 10 seconds faster around the legendary Nürburgring.

This is helped by a clever ESP system. Vauxhall has invented a ‘Competition’ setting for the GSi, which turns off the traction control for a sportier drive. It allows for greater slide angle before the safety systems kick in, giving an agility missing from the normal Insignia hatch. Yet thanks to the all-wheel-drive system, the GSi has huge traction.

On a twisting road, we were amazed at the car’s precision through 90-degree bends. Its trick set-up and sublime control comes thanks in part to the sports suspension, which has been lowered by 10mm over the standard car’s. It’s softer than the old VXR, but most buyers will be thankful for that. 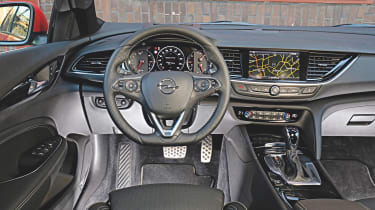 This big Vauxhall has a twin-clutch differential at the rear axle, too, which allows more torque to be sent to the outside rear wheel during cornering. It works really well, making the Insignia more playful than its standard SRi-badged siblings. As we found on the diesel car last month, the Brembo brakes are excellent, too. We’d still like to have a little more feedback from the steering, but the overall package is a capable and well-rounded effort.

You would expect a car with all this performance to sound like a sports car, but this is where the GSi falls short. You can hear a slight growl in the Insignia’s ‘Sport’ mode, but sadly only from the inside because it’s simply speaker-fed exhaust note augmentation.

Like the standard Insignia, the GSi hatch gets a massive 490-litre boot, which expands to 1,450 litres with the rear seats folded down.

Up front, you’ll find a pair of leather sports seats. They’re incredibly comfortable and supportive, and they’ve even been given a seal of approval by German ‘healthy back’ business Aktion Gesunder Rücken. 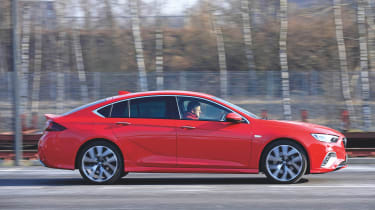 Other kit includes Brembo brakes, autonomous emergency braking and touchscreen navigation with connection to Vauxhall’s OnStar service. Despite its punchy power output, the GSi hatch is only £400 more than a like-for-like diesel version, or just a few extra quid per month on a PCP finance deal.

However, while you get a lot of kit for your cash, projected running costs are high. Combined fuel economy is quoted at just 32.5mpg, while CO2 emissions of 197g/km put it in the highest BiK tax band for petrol cars, at 37 per cent.

By comparison, a faster but slightly more expensive BMW 330i will return a claimed 43.5mpg, with more palatable emissions, too. For this reason, Vauxhall reckons that, despite the demonisation of diesel, its BiTurbo D version will still be the biggest-selling GSi.