The Vauxhall Vivaro comes in six bodystyles, with one of the largest load capacities in its class and two nine-seat Vivaro Combi options 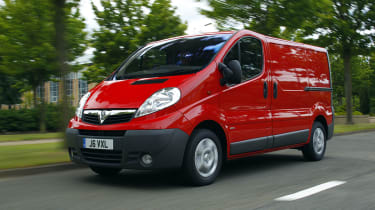 The Vauxhall Vivaro range comprises short-wheelbase (SWB) and long-wheelbase (LWB) body options. These are offered in a standard height or with a high roof, and in 2700 and 2900 variations, with different weight ranges. For the maximum payload, go for the Vivaro 2900 over the Vivaro 2700.

A double cab Vivaro is also available, and these crew cab models offer up to six seats with a standard ABS plastic bulkhead to separate passengers from the load. Plus, if you want a Vivaro purely to carry passengers, Vauxhall sells a nine-seater Vivaro Combi in SWB and LWB guises.

There’s only one engine – a 2.0-litre common-rail diesel – although it’s available with 90bhp or 115bhp. And buyers wanting to minimise fuel consumption and cut their CO2 emissions have the option of a Vivaro ecoFLEX. All models come with a six-speed manual gearbox as standard, but a six-speed automated Tecshift transmission is an option. The Vivaro Sportive is a rival to the VW Transporter Sportline and Ford Transit Sport Van, as it features sporty styling, plus extra kit like air-conditioning, an alarm and electric windows and door mirrors.

Powering the Vauxhall Vivaro is a 2.0-litre common-rail diesel engine sourced from the Renault-Nissan Alliance. There’s a choice of 90bhp or 115bhp outputs. Plus, at launch back in 2001, the Vauxhall was one of the first vans to be fitted with a six-speed gearbox as standard. This helps to deliver low fuel consumption, although it’s possible to boost economy further by choosing a Vivaro ecoFLEX.

These models use green tweaks such as low-rolling-resistance tyres, longer gear ratios and optimised aerodynamics – plus an optional speed limiter – to deliver up to 42.7mpg economy and CO2 emissions as low as 174g/km. Trouble is, while this sounds impressive, van drivers can achieve higher mpg with standard versions of the Citroen Dispatch and Peugeot Expert. And the Vivaro can’t match its Ford Transit Custom rival for efficiency in standard guise.

Still, insurance costs are competitive, with the Vauxhall line-up ranging from insurance group 4E to 5E – lower than the Mercedes Vito or Peugeot Expert. And in this class of the van market, only the Ford Transit Custom has longer service intervals than the Vauxhall, which needs a check-up at 25,000 miles or 12 months.

Vauxhall launched the Vivaro way back in 2001, so it’s one of the oldest vans in its class. But it’s still competitive in terms of dimensions, as well as payload, with the SWB Vivaro capable of carrying a heavier load than short-wheelbase versions of the Ford Transit Custom, Volkswagen Transporter and Mercedes Vito. And while the long-wheelbase Transit Custom has the edge over the equivalent Vivaro on payload, the Vauxhall still serves up one of the largest load spaces in its class – capacity for panel van models ranges from 5.3 cubic metres to 8.7 cubic metres. Plus, the van can accommodate a standard Europallet, as it has 1,268mm between the wheelarches. Equipment includes a full-height steel bulkhead to protect cab occupants from a shifting load, as well as lashing eyes in the floor and a sliding door on the nearside.

Double cab vans feature a glazed door on each side for passengers sitting in the rear seats. These models also get a plastic bulkhead, with the three rear seats incorporated into this, and each seat has a three-point seatbelt. Although the load area is smaller in double cab models, the load floor extends under the rear seat so owners can slide in longer items such as ladders or pipes. The LWB double cab load floor is just 115mm shorter than in the SWB panel van, but owners will put up with losing this small amount of load space to get the flexibility of seating for up to six.

Double-cab models are only available with the standard roof, unlike the equivalent Mercedes Vito Dualiner, which offers two roof heights. But high-roof versions of the regular Vivaro panel van provide enough interior height for most people to stand inside the van, making it useful as a service vehicle. Plus, there’s a wide range of FlexCargo racking options designed to fit the Vauxhall. As all Vivaro models are front-wheel drive, the load floor is lower than in rear-wheel-drive rivals like the Mercedes Vito. In fact, the Vivaro has the lowest floor in its class, which will help when loading bulky items. When you include the door mirrors, the van is 2,206mm wide.

Reliability is a strong point for the Vauxhall Vivaro, and many owners have covered high mileages without reporting any major problems. If buying second-hand, check for kerbing damage to the wheels and the condition of the tyres, and also make sure the steering is correctly aligned. Some drivers have encountered problems with the Tecshift automated transmission. This is the same basic set-up as the standard manual box, but with an automated gearchange and clutch mechanism, and it seems that the actuator system and electronic control unit can throw up issues with gear selection.

The safety credentials of the Vivaro could be better: it doesn’t offer electronic stability control (ESC) as standard, unlike rivals such as the Ford Transit Custom, Mercedes Vito and VW Transporter. This safety feature is an option on all models fitted with a manual transmission, but it’s disappointing that Vauxhall doesn’t include it. Still, drivers have a choice of warranty cover with this van: a 12-month, unlimited mileage policy, or cover for 24 or 36 months and 100,000 miles.

Vauxhall Vivaro has been using the 2.0-litre diesel to power the van since 2006, and it provides good performance. Owners who regularly do motorway work or drive the van fully laden will find the 115bhp version a better choice than the 90bhp engine, though. Refinement is decent whichever you go for, and the six-speed gearbox helps to keep noise to a minimum when cruising.

Vauxhall no longer offers the Vivaro with the 150bhp 2.5-litre diesel, so drivers wanting more brisk performance will have to look to rivals. The Fiat Scudo Ford Transit Custom, Mercedes Vito, Peugeot Expert, Toyota Proace and VW Transporter are all available with outputs of 150bhp-plus. Overall, the Vivaro handles well, with good ride quality either laden or unladen, and it's a comfortable van to drive for long distances.

The imaginative cab design is one of the strengths of the Vivaro. It’s an attractive layout, plus Vauxhall has paid attention to storage space. As well as a deep glovebox, there are large door pockets, cup-holders and storage for two-litre drinks bottles. Further storage under the seats adds to the practical appeal.

The driving position in the Vivaro is also good. The angled steering wheel offers a wide range of reach adjustment to ensure drivers of all shapes and sizes can get comfortable. All the instruments are clear and well laid out, with a gearchange indicator to help drivers minimise fuel consumption, although some minor switchgear is obscured by the steering wheel and can sometimes be difficult to find.