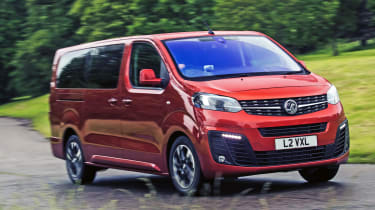 The Vauxhall Vivaro Life is the perfect antidote in a new car market that's saturated by SUVs, and is good enough to make the Vauxhall Zafira a distant memory for MPV buyers. It offers far more practical space than any seven-seat SUV can muster, and the car's van roots are barely perceptible from behind the wheel. You even get a taller driving position than most SUVs, too. There's plenty of kit on the well-specced Elite model, although the £40,000-plus price tag will be difficult for some buyers to swallow. If that's something you can get on board with, then the British-built Vivaro Life is a great car for large families.

There was a time not that long ago when the MPV market was a lot bigger than it is today and the Vauxhall Zafira was the best-selling MPV in the UK. But the rise of the SUV shrunk MPV demand, causing the most recent Zafira Tourer to be put out to pasture. That left a gap in the Vauxhall range for a spacious family car that can carry more than five people. Now that gap has been filled by a new kind of MPV, the Vauxhall Vivaro Life.

If the Vivaro name sounds familiar, that's because it's the name of the Vauxhall van that's built in the UK. The Vivaro Life is the passenger carrying version, and is the Vauxhall MPV that now caters for large families. The Vivaro Life comes in two lengths and features a five-seat layout as standard, while a third row is available as a no-cost option, which converts the Vivaro Life into an eight-seater MPV. Vauxhall also offers an optional premium seat upgrade for the middle row, which replaces the three-seat bench with a pair of swivelling captain's chairs and a folding table.

The Vivaro name is familiar, and so is this MPV's overall shape, because it's a sister model to the van-based Citroen SpaceTourer, Peugeot Traveller and Toyota Proace Verso people carriers. The main difference is the Vauxhall-ified front end of the Vivaro Life, with a rounded look and a distinctive design that seems to be the result of blending the rounded front of the Citroen with the grille of the Peugeot. It's a neat look, but aside from the Vauxhall badges, it's the only difference between the Vivaro Life and its sister machines.

It's a similar story under the skin, where you'll find the PSA Group's 2.0 BlueHDi diesel (called Turbo D here) in 150PS or 180PS guises. The former has 148bhp and a six-speed manual gearbox, while the latter is 178bhp with PSA's EAT8 eight-speed auto. Both engines are available in Medium (M) and Long (L) body styles, with the latter getting an extra 350mm of bodywork behind the rear wheels. 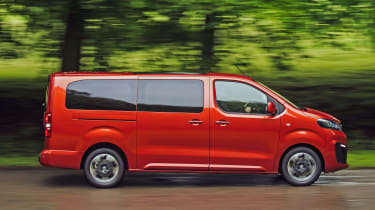 The cabin is lifted wholesale from the PSA Group models, too. There are two trim levels called Edition (which is geared towards the private hire and mobility conversion markets) and Elite, the latter of which we drive here. The Elite model is very well equipped, with heated leather seats, panoramic glass, a rear camera, touchscreen infotainment with navigation, head-up display and tinted windows all part of the spec list.

The great thing about the Vivaro Life is that its van roots create loads of space for passengers and luggage inside, while the sliding side doors mean access is simple, even the tightest spots. There's also the option of power opening and closing doors for added convenience. Boot capacity is measured in cubic metres, with the M version ranging from 3.0-3.9 cubic metres, and the L offering 3.5-4.5 cubic metres of space.

The high-set seats mean you get an SUV-style view of the road ahead, while the assorted driver aids help you to position and manoeuvre the car, and a secondary mirror allows you to keep an eye on the back seats if you need to. The seats in the rear slide back and forth on runners and can even be removed completely, although they are very heavy and you'll need somewhere to store them if you want to use the Vivaro Life's full boot capacity.

There's a huge tailgate at the back, although it raises and lowers fairly easily on its gas struts. If you want quick access to the boot, there's also separate opening tailgate glass, which allows you to put lighter items in without opening the back completely. 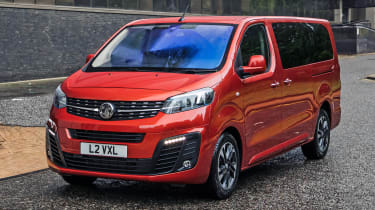 All this practicality is great, but don't go thinking that the Vivaro Life's roots mean it's van-like to drive. The Vivaro van uses the PSA Group's EMP2 platform, which is used on everything from the Peugeot 308 and 3008, the Citroen C4 SpaceTourer and Vauxhall's own Grandland X.

That means the Vivaro Life has a very car-like feel about the way it drives, with a nimbleness that you won't find in any other non-PSA van-based MPV. The steering is light and quick to respond, while the handling balance is pretty reasonable, so buyers looking to trade in their Zafira Tourers are unlikely to feel short-changed.

The ride is relatively comfortable, and it'll settle even further when there's a full load of passengers and luggage on board - that's one benefit of the Vivaro's van roots, as the suspension is designed to work better with a full load than when the van is empty. The engines offer decent pace, although the manual gearbox feels rather spongy to use - so we'd recommend the EAT8 auto for its extra power and smoother drive.