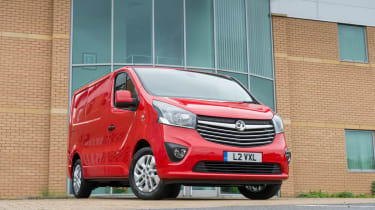 The original Vauxhall Vivaro enjoyed a 13-year production life and was still very popular when production finished in 2014. Little wonder, then, that Vauxhall decided against messing with a winning formula when it launched the second generation model.

Just like its predecessor, the Vivaro is the UK-built sister van to the Renault Trafic and it competes in the medium van segment, which is one of the most hotly contested sectors in the UK. The fact that the Vivaro is built in Luton gives it an edge over many of its rival, as van drivers are a patriotic bunch.

The launch of the Mk2 Vivaro in 2014 delivered a host of updates and upgrades, but the majority can be found under the skin. So don’t mistake the rather evolutionary styling for anything less than a thoroughly improved proposition. Crucially, the cargo area will fit the same panelling and racking from the previous model.

The Vivaro range is straightforward and will be familiar to anyone with experience of owning this popular van. There are two lengths available (L1 and L2), two heights (H1 and H2), and three basic body styles: Panel van, Double Cab and Combi bus. Vauxhall also offers a Platform Cab, ready for specialist modifications.

In 2014, the big news was the shift from the old 2.0-litre diesel engines to the new 1.6 CDTi units. Despite the lower displacement, these engines offer more power and torque than before, while offering significantly lower CO2 emissions. A real win-win for van drivers and fleet operators.

Rivals include the Ford Transit Custom, Volkswagen Transporter, Mercedes Vito, Citroen Dispatch and Peugeot Expert, not to mention the identical Renault Trafic, Nissan NV300 and Fiat Talento trio. To stay one step ahead of the competition, Vauxhall launched the Vivaro Limited Edition Nav in May 2017.

The 1.6-litre CDTi diesel engine that now powers the whole Vauxhall Vivaro range uses a common-rail injection architecture and either one or two turbochargers to achieve some strong economy figures. Vauxhall’s ecoFLEX efficiency branding is applied to certain models in the Vivaro range, denoting the presence of stop-start, regenerative braking technology and aerodynamic improvements to further shrink the van’s carbon footprint.

The entry-level 89bhp CDTi 90 version delivers 43.5mpg and CO2 emissions of 170g/km but with the addition of start/stop and regenerative braking, those figures improve to 46.3mpg and 160g/km. The 113bhp version of the engine achieves identical economy figures but isn’t offered with the ecoFLEX package of efficiency aids. If you want more power and economy, it’s the 118bhp CDTi 120 BiTurbo that you should plump for; its 47.9mpg and 155g/km are the Vivaro’s best figures. The range-topping 138bhp version of the BiTurbo unit is only a fraction down on that, with 46.3mpg and 160g/km of CO2.

For further fuel efficiency savings Vauxhall also offers an Eco Mode button on the Vivaro’s dash. This engages a more efficient engine map with reduced torque, less power and slower throttle response. It also reduces the effectiveness of the air-conditioning system so it’s hard to see too many employee drivers pressing it voluntarily but fleet operators can have the more efficient settings installed as a default. The Eco Mode also gives drivers an indication of how economically they’re driving with green, yellow or orange lights on the display according to the current driving style and a rating out of 100 given after each journey.

On the security front, Vauxhall fits all its Vivaros with deadlocks and an engine immobiliser as standard, but if you want the smart keyless entry system you'll need to pay for it from the options list.

The boxy load area dimensions of the original Vivaro were a hit with operators and Vauxhall left well enough alone in this version, for the most part. Operators who have racking or other internal storage modifications fitted to their old Vivaros will find that these add-ons can be easily transferred to the latest version because the important dimensions remain unaltered. There is 100mm of extra load length, however, and that spells increased load volumes ranging from 5.2m3 in the L1H1 version to 8.6m3 in the L2H2. 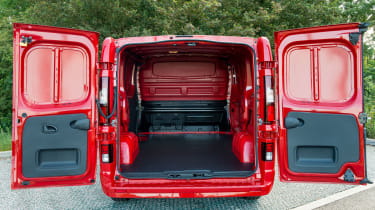 The maximum load length in the short-wheelbase model is 2,537mm but operators can extend this by specifying the ‘load through’ bulkhead. This basically amounts to a flap at the base of the bulkhead and a flip-up front passenger seat. Pipes or other long items can be poked through the hole, increasing the length of cargo that can be accommodated to 2,967mm or 3,750mm with the passenger seat folded. The high-roof model increases the 1,387mm load height to 1,898mm giving even more capacity.

The Vivaro’s well-executed load area is accessed through asymmetrically split rear doors with chunky handles. The left hand door carries the number plate and can now be locked independently so that items can be safely carried poking out of the right hand door.

Inside the van are 20 load lashing eyes spread across the floor and walls. The full steel bulkhead separates the cargo area form the cab and a sliding side door gives additional loading options.

The Vivaro has a decent reputation for reliability forged over the original model’s 12 years in service. The latest van has an all-new engine range so we’ll be watching closely to see how the 1.6-litre CDTi units shape up but otherwise the van seems impressively durable.

All versions of the Vauxhall Vivaro now come with ESP stability control featuring traction control, roll-over mitigation and load adaptive control. The electronics will even detect when a trailer is fitted and adjust stability control settings accordingly. There’s also a driver’s airbag thrown in and the Sportive models get rear parking sensors. On the options list there are thorax and curtain airbags as well as a rear reversing camera.

The Vivaro’s 1.6-litre engines might sound a little small for panel van duties but don’t knock them until you’ve tried them because performance is generally good.

The entry level CDTi 90 (89bhp) is best suited to urban duties and when equipped with stop-start plus the ecoFLEX modifications it would make a fine short-trip delivery van. For open road work, the CDTi 115 (113bhp) is better. Its 300Nm of torque at 1,500rpm is 40Nm up on the output of the CDTi 90 better enabling it to cope with weighty loads.

The sweet spot in the range is the CDTi 120 (118bhp) however. This is the first of the twin-turbo engines and the one that delivers the Vivaro’s best fuel economy. Performance is strong but the real highlight is the refinement. The engine sounds very smooth, even when pressed to the top of its rev-range.

Operators with large cargos to carry may want to shell out for the Vivaro’s range-topping powerplant. The CDTi 140 (138bhp) is another twin turbo engine with 340Nm of torque (20Nm more than the CDTi 120) at 1,750rpm. It’s noticeable that the Vivaro’s rivals offer more powerful engine options but unless you’re carrying very heavy loads, the Vivaro’s biggest hitter should be up to the job.

As well as setting a very high standard for engine refinement, the Vivaro serves up a smooth ride that copes with bumpy British tarmac without crashing or sending shudders through its body. The suspension can be a little noisy but this is partly noticeable because wind, road and engine noise are so well suppressed.

Both brakes and steering inspire confidence with their predictable responses and despite being a tall panel van, the Vivaro keeps body roll in check through the corners. Special mention must go to the Vivaro’s driving position, which offers a wide range of adjustment both from the seat and the steering column that adjusts for rake and reach.

The Vivaro displays the solid build quality you’d expect from a panel van but there are some nice design touches that liven-up the look of the cab too. The stylish instrument cluster is straight out of the latest Renault Clio (a result of the Vivaro’s design being handled by Vauxhall’s commercial vehicle partner Renault) and the piano black air vents also catch the eye. The air-conditioning controls feel a little cheap by comparison, as does the entry-level DAB radio but the more advanced infotainment options are far better. 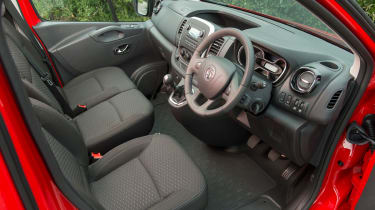 Space-wise, the Vivaro benefits from a 116mm increase in cabin length and legroom for both driver and front passenger is good for this class of van. The middle berth is less spacious, as tends to be the case, but most operators who regularly need to carry more than two passengers will opt for the 6-seat crew van.

When not in use, that middle seat folds down to create a desk with space to store a laptop and a rather flimsy feeling clipboard attachment. Elsewhere there are deep storage bins in the doors and useful dash-top areas for keeping pens and paperwork safe. A total of up to 42 litres of storage is available around the cab but the lid of the dash-top storage box proved reluctant to close on our test model.