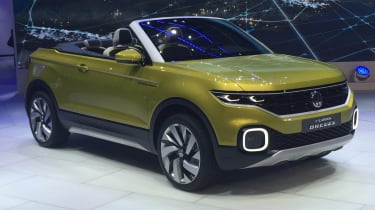 VW is previewing its long-awaited rival for the Nissan Juke, Renault Captur and Mazda CX-3 with this convertible concept called T-Cross Breeze, revealed at the 2016 Geneva Motor Show.

The T-Cross Breeze gives a close preview on the lines and proportions of a new supermini crossover model that’s expected to be based on the platform and mechanicals of the next generation of VW Polo. It’s being shown at Geneva as a drop-top – but while this is a clear sign that such a model could exist in the line-up, the regular car is expected to have a conventional fixed roof.

It’s also expected to have a pair of rear doors, in contrast to the two-door concept – but the show car’s overall proportions should be retained. As predicted by Auto Express, the T-Cross has a relatively long wheelbase for its size, at 2,565mm; that’s more than 90mm up on the current Polo’s. 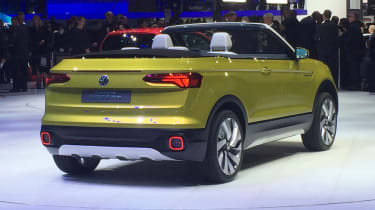 The car itself is still pretty compact, though, at 4,133mm; that’s just two millimetres shorter than a Nissan Juke. The T-Cross is extremely wide, though, at 1,798mm, or a little more than the current VW Golf. VW claims the concept’s boot capacity is "close to 300 litres", so it’s probably similar to the load space on offer in most of today’s superminis.

The T-Cross Breeze’s engine is another element that’s likely to feature in the next Polo: a version of VW’s turbocharged 1.0-litre three-cylinder petrol motor, producing 109bhp. It’s hooked up to a seven-speed dual-clutch automatic transmission, driving the front wheels only; it’s understood that VW’s baby SUV is unlikely to offer four-wheel drive at all.

VW says the concept weighs 1,250kg and can reach 62mph from rest in 10.3 seconds, while emitting 115g/km of CO2 and delivering official fuel economy of 57mpg. 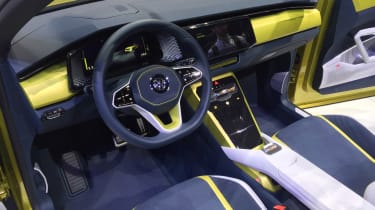 The concept’s cabin features the latest incarnation of VW’s ‘virtual cockpit’, with a high-resolution display replacing the instrument panel, and touch-sensitive surfaces instead of buttons. Indeed, the only physical switches are for the electric windows, the electric roof mechanism and the indicators and windscreen wipers.

VW is being pretty brazen about its intentions for the T-Cross – and the idea of offering it as a baby open-top rival to the Range Rover Evoque Convertible. “It is purely a concept at the moment,” VW boss Herbert Diess said, “but we can well imagine putting such a convertible on the market as a production model – an affordable fun car that is also entirely suitable for everyday use.”

The T-Cross will be joined by a Golf-sized SUV, as previewed by the T-Roc at the Geneva show back in 2014. The concepts’ badges are likely to be replaced for production; VW has registered Teracor, Tribue and Terasun in the past 12 months, and any of these would fit naturally into the line-up, alongside Tiguan and Touareg.