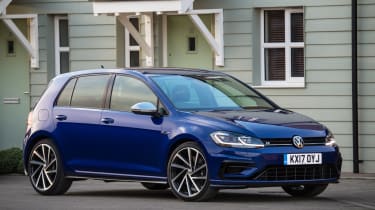 The Volkswagen Golf R is pretty much all you could ever want in a car. It’s blisteringly quick, very well made, has lots of kit and is very discreet. Thanks to its 2.0-litre engine, it can also be reasonably frugal, plus you get the security and efficiency of part-time four-wheel drive. That AWD system means the boot is slightly smaller than a regular Golf’s, but if load capacity is a priority there’s the Golf R Estate. Thanks to keen leasing deals new, supply of used Rs is plentiful; most came without any options. Despite this, we can’t think of a good reason not to buy a Golf R.

When a team of engineers from Volkswagen created a hot Golf Mk1 in their own time, the result was the Golf Sport concept, which made its debut at the 1975 Frankfurt Motor Show.

Volkswagen took a lot of convincing that there was a viable market for a hot hatch, but it put the Golf GTI into limited production, and was overwhelmed by the demand.

The GTI became something of an icon as it made its mark as a staple part of the Golf line-up, accounting for up to 10 per cent of sales. As the bar was raised ever higher, so the GTI got increasingly powerful.

Then, the even more performance-orientated Golf R32 was launched, and that was followed by the Golf R, which reached the milestone of breaching the 300bhp barrier for the first time. 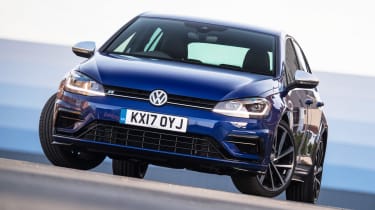 Whereas the original Golf GTI packed a 110bhp punch, the original four-wheel-drive Mk6 Golf R that arrived in February 2010 was rated at the much higher figure of 265bhp. The Mk7 Golf R featured here was launched in March 2014 with an even more potent and mouth-watering 296bhp.

The newcomer was available with three or five doors, and there was a choice of six-speed manual or DSG automatic gearboxes. Power came from a 2.0-litre four-cylinder turbocharged petrol engine. By July 2015 the R was also offered in a more practical Estate body style, with the same mechanical specification as the hatchback version.

An updated Golf R arrived in April 2016 with LED lights all round, digital dials, a new infotainment system, a 10bhp boost and a number of exterior design tweaks.

Most Golf Rs have five doors and a DSG automatic transmission; if you prefer a sportier look and don’t care too much about rear seat access, a three-door model might better suit your needs. 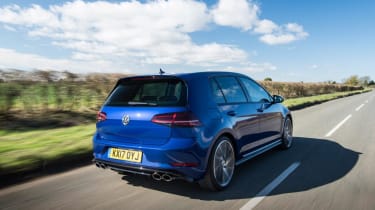 Both manual and auto boxes are great to use, so which one you go for is just a matter of personal preference. All Golf Rs come with sports suspension, 18-inch alloy wheels and xenon headlights.

A Performance Pack was also introduced in November 2017. Available only with the DSG transmission, it brought 19-inch alloys, stronger brakes and a 166mph top speed (168mph for the estate). There was a sporty rear spoiler for the hatchback, too.

The Golf GTI and GTD offer many of the R’s features and benefits, but in packages that are cheaper to buy and run.

After the urgency of the Golf R, these might seem rather anaemic, though, which is why Audi’s 362bhp (later to be 395bhp) RS 3 might hold more appeal for those after a performance-focused experience. Yet while the RS 3 is beautifully built and well kitted out, it’s also costly to buy and run, with second-hand prices starting at £30,000. 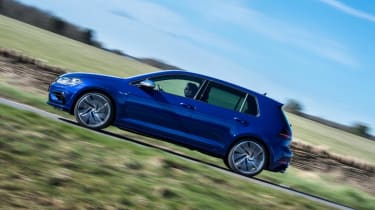 These factors also apply to the 355bhp Mercedes-AMG A 45 which, as with the RS 3 and Golf R, comes with four-wheel drive.

The Golf R hatchback came with a choice of either a manual or automatic transmission, but the Estate was offered in DSG auto form only.

Some owners have been irritated by the issue of squeaky door rubbers. Applying some Gummi Pflege is the easiest solution to this problem.

The wheels on all Golf Rs can suffer from corrosion, while the 19-inch rims can also buckle if the car runs through too many potholes. 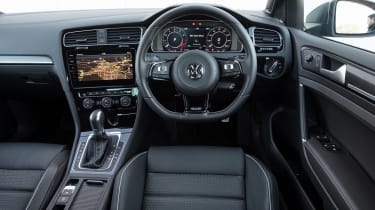 There are no surprises inside the Golf R; it’s clearly laid out and very well made. As a result, this car’s cabin is an absolute breeze to live with. Facelifted models from April 2016 get a digital dashboard that looks much smarter than the previous set-up. Boot space stands at 340 to 1,233 litres – 37 litres less than in a front-wheel-drive Golf – but the Estate offers extra room for those who need it.

Golf R owners can choose fixed or variable servicing. The former is set at 12 months or 10,000 miles; the latter allows up to two years and 18,000 miles between checks. Expect to pay £144 for an oil change, £232 for an intermediate service and £376 for a major inspection.

The pollen filter (£34) should be replaced at each service, and the oil in the four-wheel-drive system’s Haldex coupling should be changed every three years; budget £79 for this. There’s no cambelt to replace, but after every 40,000 miles the oil in a DSG transmission needs to be renewed. This job costs £199.

The Golf Mk7 has been recalled five times. VW can’t say which specifically affects the Golf R, but put a registration or VIN into www.volkswagen.co.uk/owners/recallsSubmit and that will tell you if any safety-related work is needed.

Recalls have been issued for wheel bearing and lighting failures, faulty child locks on the rear doors and airbag problems, plus ESP and anti-lock braking glitches.

While the Golf R doesn’t get its own dedicated entry in our Driver Power satisfaction surveys, the ordinary Golf Mk7 performed strongly in this year’s new car poll, ranking in 18th place, and finished 14th in the used car survey. It scores well in every category, and although its lowest rating in both polls is for running costs, the Volkswagen still beats many rivals here.