Updated VW Golf GTI features more power and extra tech, but is the Performance Pack model the one to go for? 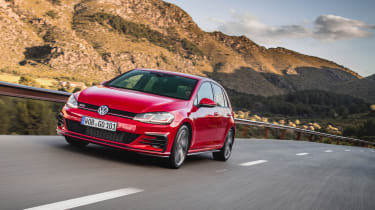 If you only tick one option box on your GTI, make it the Performance Pack. The extra power and tech is welcome, though what hasn’t changed is the Golf’s superb dual personality: It’s a really comfortable and practical daily driver that can switch to an engaging back-road blaster in an instant. The Performance Pack makes it better at the latter without harming its day-to-day usability. There are several faster or more track-focused hot hatches around, but still none are quite as complete a package as this.

We’ve been big fans of the current Volkswagen Golf GTI ever since it arrived on the scene in 2013. Here was a hot hatch that wasn’t about baiting supercars with brutal launch control or nailing hot laps of a track – just like the six generations of GTI that came before it, it was designed to be as capable at the mundane journeys as it was on the exciting ones. But with so many talented rivals now on the scene, the facelifted model has a tough crowd to fight through to get back to the top.

We’ve already driven the 2017 VW Golf GTI without the Performance Pack upgrades fitted, and while it delivered the everyday appeal in spades it didn’t quite produce in the thrills department. For about an extra £1,000 (prices are yet to be confirmed), you can up the ante by ticking the Performance Pack option, adding an extra 15bhp, rather than the 10 offered in the pre-facelift car, to make 242bhp, and 15Nm more torque. That’s not all, though: you also get bigger brakes, a limited slip differential and the Active Info digital instrument display thrown into the mix.

As you’d expect, the extra power doesn’t transform the GTI into a rabid mega-hatch. It’s shame that VW weren’t tempted to edge the output closer to the Golf GTI Clubsport’s 261bhp out of overboost. Still, a 0-62mph time of 6.2 seconds reflects that, in reality, this GTI is as fast as most will ever need to go on a public road and is certainly gutsy enough to have real fun. There are times where the barely controlled fury of something like a Honda Civic Type R is a lot more exciting, but on UK roads the chances to exploit that to the full are limited. 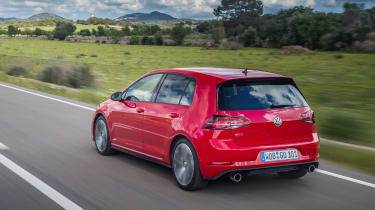 The GTI’s engine has more character than you might expect, too, with a throaty bellow lower down the rev range extending to a hard-edged tone.  It’s also very linear, with next to no lag and a willingness to rev right out, unlike many turbocharged units. It’s helped by the really positive action of the six-speed manual that, unlike in the more rapid-fire Golf R, is our pick of the two ‘boxes offered.

Our GTI came fitted with optional adaptive dampers, allowing a mature suppleness in Normal or Comfort mode to give way to a firmer but more controlled feel in Sport mode. That also ramps up the sound actuator to give more noise, which seems contrived but is one of the least fake-sounding systems of this type we’ve come across.

The Performance Pack’s real ace card is the limited slip-differential. The standard GTI’s XDS+ system (which nips at the brakes to control your line) does a passable job of keeping it tidy up to a point, but it will wash wide if you up the pace. The diff-equipped car stays locked on its line, surrendering front-end grip much later. It also spins less power away under acceleration out of the bend. 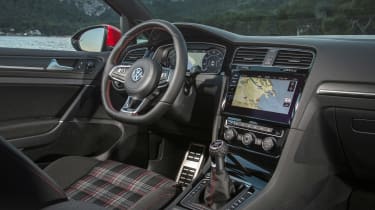 Best of all, it isn’t intrusive at low speeds, avoiding that common hot hatch trait of darting about as it follows the camber of the road. Again, there are grippier and more playful hot hatches on the market, yet the balance of comfort and handling in the GTI is pretty much spot-on.

Combined with the strong and feelsome brakes, that estimated £1,000 asking price for the Performance Pack looks like a bit of a bargain. And of course, there’s the same sober but impeccably well made and easy to live with interior, plus more than enough space for a family of four. Overall prices are yet to be confirmed, but we hope that the GTI receives the same slight drop as other models in the 2017 Golf range.