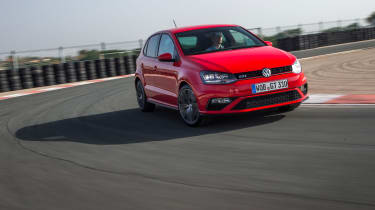 By offering manual and DSG boxes, plus three and five-door options, the Polo GTI has all its rivals covered. If you must have an auto hot hatch, the DSG is a far better option than Renaultsport’s twin-clutch Clio. It delivers rapid gearshifts, and is great to use in manual mode, although the GTI lacks that last degree of driving fun to make it a clear class leader.

While the updated Volkswagen Polo GTI is now available with a manual box, there’s still a seven-speed DSG auto for those who like to give their left foot a rest.

As with the manual, power comes from a new 1.8-litre turbo producing 189bhp and 320Nm of torque. The DSG model is marginally slower than the manual; it trails by two-tenths from 0-62mph, taking 6.9 seconds, although on the road you’d be hard-pressed to notice. 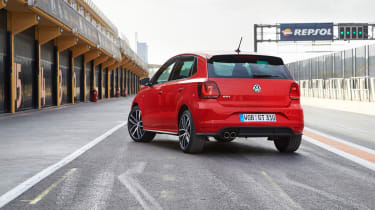 The DSG comes with steering wheel paddles, and the transmission delivers quick shifts in manual mode. Let the electronics do the work and the seven-speed box manages to be in the right gear at the right time. At full throttle the exhaust emits a distinctive upshift rasp, further enhanced by the optional Sport pack which has a special speaker to pump extra engine noise into the cabin.

Claimed DSG economy is 47.9mpg, compared to 47.1mpg for the manual car – these figures are better than those for the Renaultsport Clio auto, which returns 44.8mpg and 144g/km. 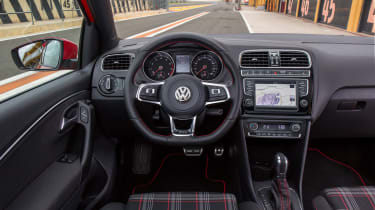 In corners, the standard XDS+ electronic diff gives the GTI far greater ability than most of its supermini hot hatch rivals, with plenty of front-end grip and minimal understeer. There’s little body roll, but while the suspension is stiff it’s in no way uncomfortable when you’re taking it easy, and the hot Polo is as accomplished as the bigger Golf GTI when it comes to cruising comfort.

As with the manual car, plenty of design tweaks help the GTI stand out from the standard Polo. The honeycomb grille with red pinstripes, bigger bumpers and 17-inch alloys are identical to the manual’s, while inside the only change is a different gear selector and paddles behind the steering wheel. The tartan cloth and red stitching on the steering wheel and gear gaiter give the ‘shrunken Golf GTI’ look to match its performance.