New open-top Volkswagen T-Roc Cabriolet SUV picks up the mantle from its Golf and Beetle-based predecessors, but it has its pitfalls 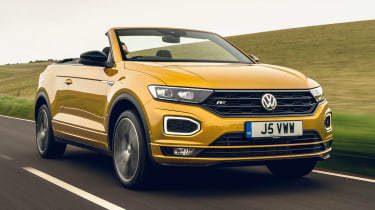 The T-Roc Cabriolet suffers from a poor ride, dull handling and a high price tag, so it’s really not a car that we can recommend. Yet for anyone out there who’s looking to buy a convertible that has room for kids in the back and SUV styling, there’s nothing else like it on the market at the moment– and no direct rivals are imminent. It avoids typical cabriolet pitfalls such as creaking trim and buffeting at high speed, too.

The Volkswagen T-Roc range has been expanded this year – first with the hot T-Roc R, which we reviewed early in 2020, and now with the T-Roc Cabriolet. This new model is one of an extremely small number of convertible SUVs that have ever been built, so it’s safe to say it’s a niche car.

Its rivals are hard to pin down, then; perhaps buyers looking for an affordable drop-top with some room for occasional passengers might also consider a BMW 2 Series Convertible, or a MINI Convertible, but neither of those shares the T-Roc’s SUV styling. There’s also the Mazda MX-5, although that has no rear seats.

Yet the T-Roc may not even fall into the affordable category at all – especially our R-Line test car, which costs £33,420 without any options. Once you’ve added the extras that this car came with, including the Driver Assistance Pack Plus, leather upholstery, a beats stereo, keyless entry, the Winter pack, a reversing camera, and Dynamic Chassis Control, it’s more than £40,000. 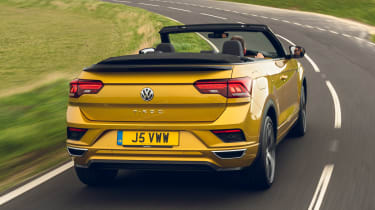 Even the entry-level T-Roc Cabriolet, with a 1.0-litre engine and a manual gearbox, is £26,750, which is still a considerable sum.

Given that our car is a top-spec model, it’s a shame that things such as keyless entry and leather seats aren’t standard. Even the wind deflector that fits over the rear seats is a £325 option, which is steep for what it is.

Thankfully you don’t need to add it; one of this T-Roc’s best aspects is that wind noise and buffeting aren’t an issue with its roof down, even at higher speeds. With the top lowered – which takes just nine seconds, at speeds of up to 19mph – and the windows up, you can enjoy the sunshine without feeling too windswept.

For the driver, the T-Roc Cabriolet isn’t too different from a normal hard-top model, with light but reasonably precise steering, decent body control and enough grip. It’s good enough to drive, but not much fun. 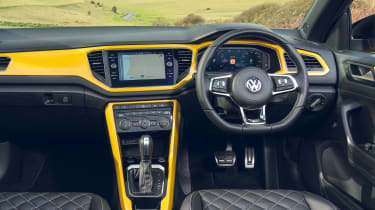 The 1.5-litre petrol engine is similarly workmanlike; it does the job, providing fair performance (there’s 148bhp and 0-62mph takes 9.6 seconds) while remaining smooth and quiet. It doesn’t excel in any one area, so it fades into the background unless you really stamp on the throttle.

If you do this, the car’s DSG gearbox changes down quickly enough, although it can sometimes shift down when you don’t expect it to. But it’s quick to react when you’re at a roundabout or junction, which is the upside of its willingness to kick down, and it’s responsive enough if you decide to use it in manual mode.

Most buyers won’t be interested in the way the T-Roc Cabriolet drives, but many more will want to know about how it rides. Sadly, it’s bad news, because it’s uncomfortable.

The VW never settles down, even on roads that seem smooth in most cars. It constantly shuffles and hops over even the smallest bumps, so the ride is busy and unpleasant. Over big bumps and drain covers it shudders and crashes, and the T-Roc doesn’t settle significantly when you get up to higher speeds, either. On fast A and B-roads it still shudders and shakes all the time. 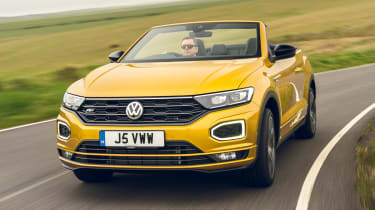 Our car was fitted with adaptive dampers as part of the Dynamic Chassis Control option (£1,075), but these don’t ease the problem. In Sport mode the car is even stiffer yet feels no sharper to drive, and even though Comfort mode helps soften the jolts into large potholes, it doesn’t dampen the constant vibration from the road surface enough. There’s not much difference between each mode, so it’s not an option we’d add.

Four-seat convertibles need extra strengthening over the hard-top cars that they’re based on, and often lose rigidity as a result. This means they end up weighing more and can suffer from creaks and rattles inside. But the T-Roc is pretty good in this area. The build quality inside is good and we didn’t notice any noises, even as the car bounced over lumpy tarmac.

However the quality of the materials in the T-Roc is still a sore point, as it is in the normal model. There are too many hard plastics and cheap-looking materials here when you consider the £40,000 price tag.

Tech is good, however. The latest version of VW’s infotainment set-up is included, with Android Auto and Apple CarPlay as standard. These systems work well on the sharp, modern-looking eight-inch screen on the dash. There’s a USB-C port behind the gearlever, with an adapter if your phone still uses the old standard port. 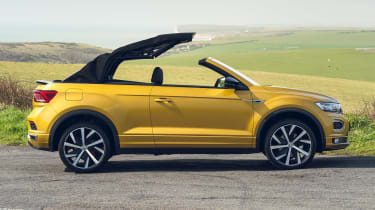 The digital dash (which VW calls Active Info Display) is another benefit of R-Line trim, allowing you to display sat-nav maps, radio station info, trip data and more right below your eyeline. It features a 10.25-inch display that’s sharp and easy to use via the steering wheel buttons and switches.

The front seats are comfortable enough, and there’s decent headroom in the back seats as well. Legroom is limited, but if those sitting in the front move their seats to accommodate, the T-Roc can take four adults at a pinch. However, the rear seat-backs are quite upright.

Boot capacity is acceptable, with enough space for shopping and everyday use, but a normal T-Roc is much more practical for things like buggies, bikes and holiday bags. The small opening limits what you can get in the cabrio, but you can fold the rear bench to open up space behind the front seats.