It's a former Car of the Year, but is Volvo's stylish SUV the XC90 a sound proposition used? 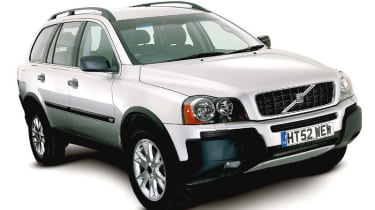 Not all 4x4s are environmental disasters. Take the Volvo XC90 as an example. With a wide range of engines, efficient design and a seven-seat cabin, it blends off-roader looks with MPV practicality. Yet it needn't cost the earth to run.

When the stylish SUV hit dealers in 2002, it took the market by storm, with customers willing to add their names to lengthy waiting lists. It was voted Car of the Year in Auto Express's 2003 New Car Honours, and while it's still a popular buy new, the first second-hand examples are now hitting forecourts.

Early models start from £23,000 - that will net you an 03 or 53-plate car with 50,000 miles on the clock. There's little difference in values between petrol and diesel. More D5 models have been sold, but they're in greater demand.

Although the popular Geartronic automatic is great to use, be sure you can live with its hesitancy when pulling away.

There are few T6 models around and the more plentiful D5 is the pick anyway, even with fuel economy of only 25mpg. But given that T6 versions aren't much thirstier, temptingly priced examples are fine for low-mileage drivers.

Don't expect much in terms of off-road ability. Yet on tarmac, especially when towing, the XC90 is superb.

October 2003: Faulty seatbelt fittings on cars built from June 2002 to May 2003. ABS problem on models made between May and September 2003.January 2004: Injector pipe system on vehicles manufactured in December 2003 can experience a fuel leak.November 2005: Battery earth-cable can short circuit on examples made from August 2004 to October 2005.

Chris Lamb from Lichfield, Staffs, has owned his 53-plate XC90 D5 SE since new, and is generally impressed with it. "The car is very comfortable and ideal for towing, but it's a little bit slow off the mark," he explained.

"It's also thirsty, although the dealer service has been excellent and I think the model is great value. I'd be quite happy to buy another one - especially as the new D5 engine is even better."

Even though it's been around for a while, the XC90 is still one of the most sought after SUVs. It offers all the usual Volvo virtues of great build and superior safety levels, wrapped up in a practical and stylish package. However, don't expect to run one on a tight budget - they're thirsty and the cost of maintenance is higher than for more mainstream rivals. We the strong residuals, image and looks, practicality and safety. We don't like the high running costs, sluggish (albeit refined) diesel engine and lack of availability on used forecourts.