We’ve already driven the middling petrol Giulia abroad, but do its talents still shine in the UK? 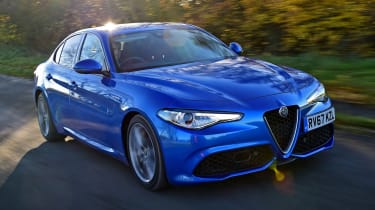 The new Veloce model plays brilliantly to the Giulia’s strengths. The extra power unlocks more fun from the already agile chassis of the base car, while the engine feels strong and willing. It’s even fairly economical, and the added visual clout builds on an already attractive design. The entry-level petrol model is still a talented performer, however, and it’s much cheaper to buy.

We’ve yet to drive a bad variant in the Alfa Romeo Giulia range, with everything from the base diesel to the monstrous 503bhp Quadrifoglio offering a composed and enjoyable driving experience, as well as heaps of showroom appeal.

The Veloce version has now arrived in UK showrooms, as Alfa looks to address the question of engine choice, which has proved an area of weakness when compared to the German establishment. It uses the same basic 2.0-litre four-cylinder petrol engine you’ll find in the entry-level car, but with multiple revisions to boost power from 197bhp to 276bhp. It also adds an extra 70Nm of torque.

On paper, at least, this new Giulia should offer enough pace to entertain. And it does; 0-62mph comes up in a sprightly 5.7 seconds, which is fast enough to worry most hot hatches – also beating a BMW 330i off the line. 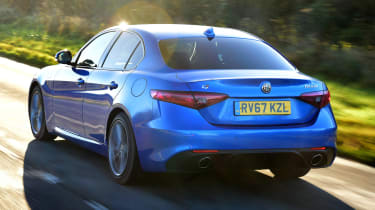 It’s a smooth and flexible powertrain, with enough torque to stop the standard-fit eight-speed automatic gearbox from kicking down too eagerly. And while it doesn’t actively encourage you to chase the redline in every gear, it at least doesn’t run out of puff once it’s there. The muted four-cylinder drone turns into a more characterful growl the harder you rev it, too.

Dial things back and it becomes a relatively hushed cruiser, keeping revs low and engine noise to a minimum. You also stand a better chance of getting near the impressive official combined figure of 46mpg, although if it’s economy you truly care about, the diesel is a better bet.

The extra power over the entry-level car allows you to exploit the Giulia’s agile and engaging chassis, too. The addition of a limited-slip differential on Veloce models makes it feel planted and grippy through the bends, while strong body control and quick, direct steering boosts confidence.

The ride isn’t perfect, however, as it can feel a bit loose and fidgety in the car’s ‘Natural’ setting over rough surfaces. Switch the DNA switch to dynamic, though, and the adaptive dampers tighten to give a slightly firmer but more controlled ride. 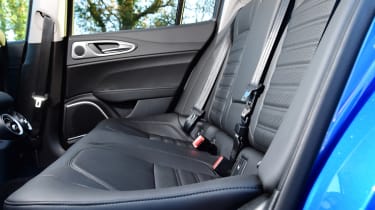 It’s easy to spot the Veloce next to lesser Giulias, thanks to its larger air intakes, which give it a bit more visual menace from the front. The faux rear diffuser and Veloce badging add extra desirability, too. Our test car’s new Misano Blue paint scheme looks fantastic, too, and the yellow brake callipers suit it nicely.

Inside, you’ll find perforated leather and aluminium trim inserts, lifting it above lesser Giulia petrol models, which can only be ordered in base or Super spec. Veloce cars come well-equipped, too, with sat-nav, xenon headlamps, front and rear parking sensors and autonomous braking all standard.

A few of the cabin materials feel cheaper to the touch than in rival cars, and the infotainment isn’t great, but overall it’s a driver-focused environment and a nice place to spend time.