Stelvio offers a comfortable interior. There’s decent space inside which matches rather than betters rivals

Most cars in this class carry two occupants with the rear seats used to occasionally carry children. The good news is that the Stelvio offers a decent amount of space inside: it’s not sparkling, but it matches the competition.

Up front, it's reasonably spacious: there’s a good amount of headroom even for six-footers and visibility is fine thanks to thin-ish pillars. The Alfa doesn't offer the generous rear-seat room of less style-driven SUV rivals, but average-sized adults will find enough comfort to make this a useable family buy. The boot is comparable with rivals thanks to a flat, long load space, but it could be wider.

For storage, the Stelvio scores pretty highly. There are large door pockets for water bottles and other oddments, as well as a couple of cupholders ahead of the gearlever, along with a USB charging port. The glovebox is of a decent size, as is the space under the centre armrest. However, flipping the lids on the various trays and cubbies highlights some of the Alfa’s not-so-premium-quality materials, especially next to the plush-feeling Mercedes GLC.

The Stelvio is one of the longest cars in the class – the Audi Q5, BMW X3 and Mercedes GLC are all slightly shorter, with only the F-Pace being marginally longer than the Alfa. The same can be said for width, too – the Stelvio is slightly wider than its German rivals. Along with the GLC, though, the Stelvio is shorter than the Q5, X3 and F-Pace.

Interior space is pretty good for a sporty SUV – it’s acceptable for the class rather than exceeding rivals, but given the sporting focus of the Stelvio, it’s hard to argue with that. Stick four six-footers inside the Alfa and the two rear passengers would have their knees brushing the backs of the front seats a little. Headroom is merely okay, but that’s due to the sloping roof design.

Due to the Stelvio being positioned away from the family-oriented market there are no clever rear seats – they don’t slide or recline to allow more space, although do fold in a 40:20:40 split to make the boot more versatile. 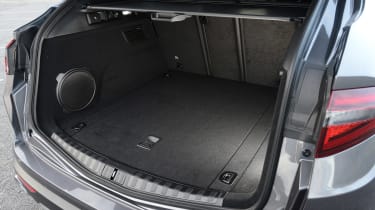 As in several areas, the Stelvio sits in the middle of the mix when compared to its rivals. The Stelvio’s hatch slopes more heavily at the rear than some rivals, while the roofline is lower, too. Boot space stands at 525 litres, which is 20 litres more than the Volvo XC60, but 25 litres less than a Mercedes GLC.

The standard-fit electric tailgate reveals a usefully long, flat loading space, although it could be wider as the rear suspension takes up space over the wheelarches. There’s no lip when the seats are folded and there’s no step to lug items over, though. Sadly, there are no thoughtful touches like underfloor storage, hooks or netting to store loose or bulky items.