Despite the increased ride height, the Stelvio drives almost as sweetly as the Giulia. The sharp handling does affect ride comfort a bit, though.

Underneath the Alfa’s jacked-up, swooping body is a modified version of the Giorgio platform that underpins the Italian brand’s Giulia compact executive saloon.

For a mainstream SUV the Stelvio boasts some advanced engineering that you might not be able to see, but, Alfa hopes, you will be able to feel. The first is a carbon fibre propshaft, which combined with a number of other measures – such as aluminium suspension components – helps keep weight down.

Those aluminium components are part of the double-wishbone front suspension system, while at the rear there’s a multi-link axle. This set-up gives the Stelvio a dynamic edge over most of its rivals.

Compared with the Giulia, the Stelvio has been raised by 22cm to help give it a proper SUV stance, while Alfa’s Q4 four-wheel-drive system is standard on all bar the diesel Lusso Ti.

This is rear-drive-only in normal conditions, but if the ECU detects some wheelspin it can send up to 50 per cent of the power to the front wheels to improve traction. The set-up is focused more on improving progress on the road than it is off it, though. An eight-speed automatic gearbox is standard across the range. It all means that the Stelvio is huge fun to drive for an SUV.

This might be a jacked-up SUV, but what strikes you first out on the road is the speed and response of the car’s steering. It’s becoming an Alfa trademark, and despite the Stelvio’s size you become accustomed to how fast it turns in. The steering is quick, and there’s enough grip that the chassis can cope with it, but until you get used to it, it does make it feel a little nervous and not so relaxed.

It’s an agile SUV, but the trade-off is that the car feels jittery due to its more focused set-up. The ride isn’t as refined as either a Volvo XC60's or Mercedes GLC's, with an unsettled feeling over bumpy surfaces regardless of speed, although the more you push the chassis the better the dampers respond, showing the Stelvio’s impressive body control.

Alfa insists that, like the Macan and F-Pace, the Stelvio is a road-based SUV – it does without the kind of off-road driving modes you’d find on a Land Rover Discovery Sport, although there is a downhill descent system fitted, should the need arise.

It's clear that Alfa Romeo designed the Stelvio to be the sports car of the family SUV world. So, along with the aluminum parts, all Stelvios get a carbon fibre prop-shaft – something that’s almost unheard of at this price point.

The petrol range includes a 2.0-litre, four-cylinder turbocharged unit with either 197bhp or 276bhp. We've driven the latter, which is a very punchy powertrain, offering up a broad spread of power felt from just over 2,000rpm and taking the SUV from 0-62mph in 5.7 seconds whether you go for rear or four-wheel drive.

It's smooth and flexible, but it's a pity the engine note is barely any more inspiring than the diesel's, as having sweet-sounding petrol engines was historically an Alfa trait. We're yet to sample the lower-powered version, but expect it to be more of a cruiser thanks to the 70Nm torque deficit and significant power drop.

Topping the petrol range is the Quadrifoglio version, which features racy styling, carbon ceramic brakes and the 503bhp 2.9-litre bi-turbo V6 engine and eight-speed automatic gearbox from the Giulia Quadrifoglio. However, in the Stelvio they're hooked up to Alfa’s Q4 all-wheel drive system to deliver maximum traction.

The Quadrifoglio is likely to be a rare but interesting sight on British roads, but you can rest assured that anyone driving one will be having a great time. Just as in the Giulia, the V6 and eight-speed auto make an excellent paring: the wide spread of torque, sharp throttle response and thumping gear changes make it one of the best powertrains in the business. It’s clever, too, as it can shut down a bank of its cylinders without detection to reduce fuel consumption when cruising at steady speeds of up to around 80mph.

You can't fail to notice the brutal acceleration, but after that you notice the steering, which is super-sharp and accurate; the slightest twitch from your wrist is transmitted directly to the wheels. It instills the Stelvio with a greater sense of agility than its kerbweight would lead you to believe possible. Combined with the four-wheel drive system, it makes for an incredibly fast and secure performance car.

Flick through the various drive modes up to the most aggressive Race setting, and the reins are loosened on the stability control. This allows for a bit more movement at the rear end before the four-wheel drive system gathers it all up and launches you down the road, but even here it’s incredibly surefooted.

This is all well and good, but it’s the diesel that will tempt most buyers in the real world. The more powerful 207bhp 2.2-litre unit is used in a variety of Fiat Group cars, most notably the Alfa Giulia saloon, and it’s our choice of the mainstream crop. With 470Nm of torque, it pulls sweetly. It’s helped by the smooth auto box when left to its own devices. However, engaging manual mode using the shift paddles makes changes jerkier.

Engine refinement is okay, but it’s a little noisy on the move, with a diesel grumble evident in the cabin if you rev the motor hard. There’s more wind noise, too, compared with some rivals.

However, keep your foot pinned off the line and acceleration is incredibly swift for a diesel SUV. With a 1,745kg kerbweight, we recorded an impressive 0-60mph time of 6.5 seconds at our test track, while that low-down torque at 1,750rpm and a weight saving of around 200kg over its competitors helped the Stelvio deliver strong in-gear acceleration times. 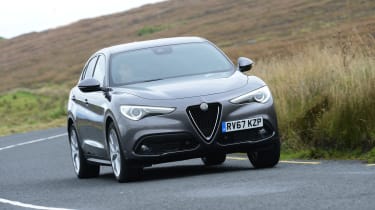 All cars come with a ZF eight-speed automatic gearbox – the same type BMW uses in the X3 and Jaguar in the F-Pace. It’s a good combination with the engines we’ve tried and delivers quick and sharp gear changes. A worthy upgrade is to go for the aluminium paddles on the steering column that add a level of tactility lacking in the Stelvio’s rivals – those cars tend to use flimsier plastic paddles. If you're a keen driver who likes to take control, it's a nice touch.