Can the entry-level Alpine A110 Pure really be as much fun to drive as the range-topping Légende model? We drove one to find out 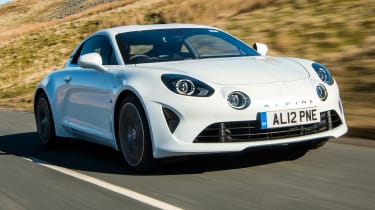 A deep dive into the options list means we’ve still not experienced an Alpine A110 in its most basic form, but the more affordable Pure edition carries on where the Première left off by offering a truly engaging and entertaining driving experience – and a genuine alternative to a Porsche Cayman.

With the original 1955-car run of Première Éditions already accounted for, the Alpine A110 range is now split between two trim levels – the Pure, which Alpine says is closest in spirit to the Monte Carlo Rally-winning original, and the Légende, with a more lavish equipment level, carbonfibre detailing, and a deliciously retro design for its alloy wheels.

Given Alpine’s lightweight philosophy, the back-to-basics Pure seems like the most appealing option for driving enthusiasts, particularly as its £46,905 price tag also makes it the most affordable variant of the A110 yet.

It isn’t a true stripped-back sportster like a Lotus Elise, of course. Wheels aside, which are 17-inch, ten-spoke items on the Pure, you lose nothing visually to other Alpines, and inside it’s much the same story, with gorgeous 13.1kg Sabelt one-piece bucket seats, black leather and aluminium detailing, and eye catching body-colour trim elements on each door card – plus keyless go, satnav, climate control and a telematics system including a lap-timer. 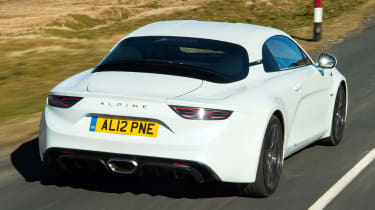 Our test car isn’t quite as pure as its name suggests though, with around £6,500 of options taking the price to £53,553. While the iridescent white paintwork is a stunning addition (albeit an expensive one at £1,656), the optional 18-inch “Sérac” alloy wheels deny us a chance to experience the A110 on slightly fatter tyres.

A valved sports exhaust system comes along for the ride too at £1,380, as does an upgraded braking system with 320mm discs for £936. All are welcome and make the Pure feel genuinely special, but serve to build up the basic price to less palatable levels and prevent us from sampling the car at its most basic.

The flip side to this is that this A110 is no less wonderful to drive than it ever has been. Few cars dance across the road with such understanding of the surface underneath, floating where you expect crashiness and skimming over bumps where others shudder. At low speeds and on rougher surfaces the car does jiggle – perhaps it’d be better with those smaller-diameter wheels – but at higher speeds the A110 bobs and flows in a way that’s alien to many harshly-suspended performance cars.

It’s so different in fact that you might find it disconcerting at first. The steering is much lighter than that of most rivals, and tends to move around in your hands with ruts and cambers. You soon tune in to this lack of resistance however, and appreciate the sharp responses, gentle feedback, and a chassis that feels like it rotates around your hips. The tiny size is handy too – this is a genuinely usable car on some of Britain’s narrower country roads.

The A110’s light weight means that 1.8 can deliver a genuine performance hit, and the soundtrack is undoubtedly enhanced by the sports exhaust. Shifts from the dual-clutch gearbox are swift (and at their best in Sport mode) while the pliant ride and generous levels of grip mean you can carry speed as well as gaining it quickly. And when you do finally need to stop, the Brembos are fantastic, full of pedal feel and another beneficiary of the car’s lack of mass.

With minimal front and rear luggage space it’s not the ideal sports car for touring, though on a run you’ll not have to try too hard to match Alpine’s 46mpg combined figure. The A110 might lack the all-round quality of a Porsche Cayman or Audi TT, but even at its most basic (sort of…) few cars on sale today are more fun.