The Audi Q8 sits above the Q7 as the brand's new flagship SUV, but what's it like on the road? We find out... 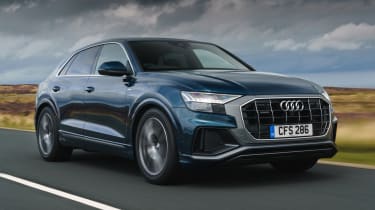 The new Audi Q8 delivers as a luxurious flagship SUV – and there are more reasons to choose one over the cheaper and more practical Q7 than you might expect. Headroom isn’t impeded by the rakish rear quarter, and the interior design and infotainment comes lifted straight from Audi’s latest playbook. An appealing engine and good road manners make this an accomplished range-topper.

With SUVs continuing to dominate a large slice of the new car market, the latest addition to Audi’s line-up was almost inevitable. The Q8 is a new flagship for the German brand, positioned above the Q7 as a more stylish and desirable choice.

Thanks to its more rakish design and completely new interior, it feels significantly different, too. It also means Audi now fields a true rival for the BMW X6 and Mercedes GLE Coupe, two cars that have come to define the coupe SUV niche in the last few years.

So then; what exactly separates this car from the Q7 it shares a platform with? Plenty has changed at Audi in the last two years and this car proves it. 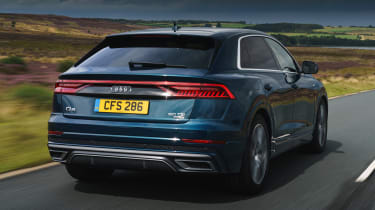 The firm’s latest design language is carved into the coupe shape with a larger grille and sportier, more angular front apron. New headlights, plus a full-width LED lighting strip on the tailgate complete the look, while frameless windows inject a premium sense of occasion and make it immediately feel more than just a rakish Q7.

The interior pushes things on even further, with a design inspired heavily by Audi’s uber-luxurious A8 limousine. The new dashboard is heavily clad in a combination of smooth, sharp looking piano black plastics and brushed metals; it feels extremely modern inside. The metalwork is excellent, but a quick push and prod reveals that some of the plastic surfaces can be just a little creaky in places.

The design centres around the crisp-looking new MMI Touch dual-screen infotainment system, again found elsewhere in the upper echelons of Audi’s range. A main 10.1-inch display sits within the wide dashboard, with a secondary 8.6-inch screen right above the centre console for functions like the radio and climate control.

We’ve said many times before that eliminating tactile controls from the cabin isn’t necessarily a good thing, as touchscreen-only setups can be fiddly to use on the move. The haptic feedback offered by the displays does at least mean that the system feels more like clicking a virtual button than swiping and tapping at a smartphone, and if you’re into in-car technology you’ll probably love it. But those more familiar with Audi’s older products may be less convinced.

The 12.3-inch Virtual Cockpit digital dials are standard fit, too, and are as simple to use and configure as ever. It’s still the clearest digital instrument setup on the market.

As for practicality, passenger space doesn’t really take too much of a knock compared to the Q7. There’s plenty of room up front for driver and passenger, and even rear occupants aren’t penalised too much by the pert back end; the coupe styling makes its impression over the boot more than the cabin.

That does mean that cargo space slumps to 603 litres with all seats in place – and there is no third row like you’ll find in the Q7. At this sort of money you’ll find more space in the back of a Range Rover Sport, though compared with other coupe SUVs, the Audi is more than competitive. There’s a slightly awkward tall lip to access the boot, however, and it sits in between the BMW X6 and Mercedes GLE Coupe for outright space. 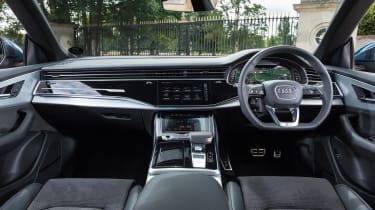 To drive, the Q8 feels much like any other big Audi on the VW Group’s MLB Evo platform, but there are some minor changes over the Q7. For instance, all UK cars get Sports air suspension; keep the Q8 in its most comfortable settings and it’s a wonderful cruiser, the ride only picking up minor fidgets at lower speeds while still remaining decently flat round corners.

Push things into Dynamic though, and things start to come undone. There’s no doubt that it’s an SUV in which you can press on in with confidence, but in its racier modes the Q8’s ride is extremely brittle and susceptive to thumps and jostles. We’d use this setting sparingly – and on only the best surfaces.

There’s little about the Q8’s steering and engine that hasn’t already been said in the context of other Audi models. The wheel feels light in the hand in all but Dynamic mode, and is almost devoid of feel. But it’s tightly strung and responsive enough to inputs and direction changes.

The 3.0-litre V6 under the bonnet is joined by a 48-volt mild hybrid system for seamless engine shut-off – giving it a coasting function at motorway speeds. In the lighter A7 Sportback it’s a unit we like very much, and while it doesn’t feel quite as fast as the performance figures suggest, its still supremely refined. The only thing that lets it down is the eight-speed torque converter automatic gearbox, which is a little hesitant and notchy off the line.