Gorgeous looks, a V10 screamer and the wind in your hair means the Audi R8 Spyder is a sensational supercar

As lovely to drive as it is to look at, the Spyder is the R8 to go for. With the hood down, the sun on your face, and that V10 engine screaming its heart out, experiences on four wheels don’t get much better than this. At any price.

The headline numbers for all the latest versions of Audi’s R8 tend to include the words lighter, stiffer and faster, and this deeply sexy new £129,990 Spyder model is no exception.

Everything that moves beneath the car’s handsomely redesigned new bodywork has been paired back, improved and mechanically enhanced. The chassis is several kilograms lighter than in the previous generation model (but 50kg more than the current coupe) thanks to the use of carbon and aluminium but – and this is the truly impressive stat – it’s also 55 per cent stiffer than before.

This provides a basic platform that bosses claim is unsurpassed by any other rival, at any price point. The R8 Spyder, in other words, is the stiffest open top car money can buy.

But at the same time it is not the most powerful. Nor does it have the most torque. That’s because Audi has chosen not to offer the car in Plus guise with the 602bhp version of its thundering 5.2-litre V10 engine. Although this will come later – be under no illusion about that. 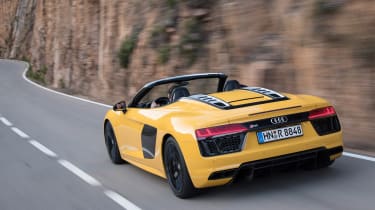 Instead, the Spyder makes do with the mildly detuned 533bhp version of the howling V10. As a result, 0-62mph takes a somewhat languid 3.6 seconds, while the top speed is an even more weedy 197mph.

I’m joking, of course. In reality, the all wheel-drive Spyder has more than enough performance to please all but the most crazed speed junkies. On the move, in fact, it doesn’t feel much slower than a 602bhp coupe – even though it’s heavier and less powerful.

The canvas hood is an all-electric masterpiece of street theatre that takes 20 seconds to perform its ballet routine. It can also be lowered or raised at up to 30mph. There’s almost no buffeting of with the wind-breaker in place, while once up it provides the Spyder with an uncanny level of refinement.

And if you then drop the little aero screen that sits behind the seats, the noise that erupts into the cabin when you go past 4,000rpm is truly epic. And at the 8,500rpm red line it’s enough to make a full head of hair stand on its ends. 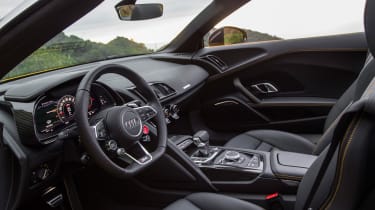 On the move there is accuracy and precision by the bucket load thanks to the R8’s new optional Dynamic steering. There’s little in the way of feel, so you end up trusting that the front tyres are going to go where you aim them – simply using your eyes. Your hands and fingertips receive rather less information, which is a shame, although to be fair the Dynamic-equipped Spyder did seem to steer with a touch more purity than the coupe’s we’ve tried. This could well be something to do with the equivalent suspension settings being a fraction softer than they are in the coupe, due to Audi’s desire to make the Spyder feel that little bit more like a cruiser than an out-and-out supercar. 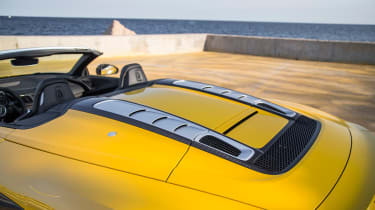 Elsewhere, the new R8 Spyder is tough to fault. The engine is a gem, the ride and handling are beautifully balanced, while the sense of refinement screams at you from every direction. The hood is a thing of genius and the dual clutch gearbox works every bit as brilliantly as it does in the coupe. That said, the small boot in the nose doesn’t leave much room for bigger, solid cases – meaning a week away continues to demand some very practical packing.

As with most cars of this ilk, the compromises suffered by the Spyder are so hard to spot you do end up thinking; why bother with the coupe? The Spyder is every bit as engaging to drive as its fixed-roof sibling, with the huge added bonus of being able to drop the roof whenever the sun shines. If it was my money, it would go on the Spyder every day of the week.