V10 engine sounds fantastic, but the R8 is an extremely useable supercar 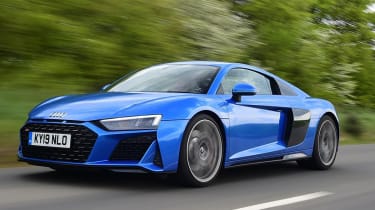 Extensive use of aluminium in the R8’s structure has allowed Audi's engineers to reduce weight by around 15 per cent over the old car, while the familiar, naturally aspirated 5.2-litre V10 has been tweaked to deliver an astonishing 611bhp in the R8 Performance – that's 49bhp more than a McLaren 570S. This powerplant is paired with a seven-speed twin-clutch S tronic gearbox that drives all four wheels via a new quattro transmission.

Press the red starter button on the steering wheel, and the V10 barks into life with enough noisy violence to set off car alarms and startle passers-by - if it’s attention you’re after, then this engine delivers it in spades. The entry rear-wheel-drive model's 540Nm torque figure means it can’t match its rivals for mid-range muscle, but it’s got them well beaten for aural drama.

From its deep growl at low revs through to the thrilling metallic howl as you close in on the 8,500rpm red line, it sounds every bit as exciting as you’d expect from a supercar. Go for the optional Sports exhaust, and there's even more volume added to the glorious mechanical orchestra.

Maximum torque arrives at 6,600rpm, so the R8’s driving experience is dominated by the screaming V10. At the track, we've clocked an R8 from 0-60mph in a mere 2.9 seconds – that’s two-tenths quicker than Audi’s claimed time. Having short ratios and a razor-sharp throttle response means the R8 surges relentlessly forward no matter what gear you’re in.

And while it doesn’t have a McLaren 570S’s ferocious top-end bite, the Audi is still sensationally quick. 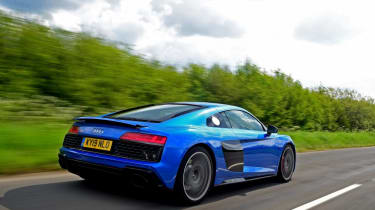 Purists will mourn the lack of a manual gearbox, but the twin-clutch S tronic auto is so capable in every situation that it's easy to forgive and forget. At low speeds you barely feel the shifts, but fire through a full-bore upshift in performance mode and Audi has engineered a little kick in the back to make the full-throttle driving experience that much more visceral. The twin-clutch box rips through shifts, and it delivers delicious throttle blips on the way down, too.

The Drive Select system allows you to choose between Normal, Comfort, Individual and Dynamic driving modes, and Performance models add a setting that can tweak the stability control’s intervention to suit the road conditions. The steering is light and super-sharp, and although the R8’s steering lacks the beautifully weighted feel of a Porsche 911, even in its sportiest setting, it does let you place the car with laser-guided accuracy.

There's a devastating amount of grip in high-speed corners – noticeably more than in the last R8, in fact. There’s also great body control and strong traction, but switch off the electronic safety net in the quattro models, and the four-wheel-drive system can shuffle 100 per cent of the engine’s torque to the rear wheels for lurid powerslides. Surprisingly, the R8 feels more agile on the limit than a Huracan, even though both cars are pretty much the same under the skin.

Of course, if you dial down the powertrain and dampers and go at a more sedate pace, then the R8 is no harder to pilot than a TT around town. Visibility isn’t quite as good as you'll find in a 911, but it's better than in the Honda NSX. On the motorway, the engine spins at a heady 2,900rpm at 70mph, plus there’s a fair amount of tyre roar, so it's not the most relaxing. Still, the £1,600 adaptive dampers deliver a composed ride, although a McLaren 570S is better still.