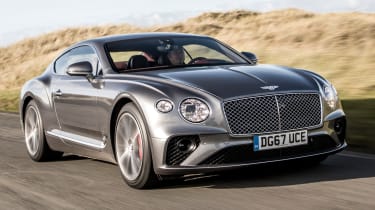 While you might have missed the Continental GT’s second-generation updates, this third-generation model boasts a dynamic new style that makes it much more eye-catching.

Starting with the front end, the traditional Bentley grille has been stretched across the nose, the LED headlamps given a more contemporary style with a crystal-effect, and the intakes below the grille are sleeker. The front and rear overhangs are shorter than before, and the wheelbase is a little longer, which has enabled a lower, sleeker bonnet line. The rear haunches are muscular, but there’s an elegant tapered feel to the back end that’s very different to the bulky boot of the previous generation, befitting of this new GT. 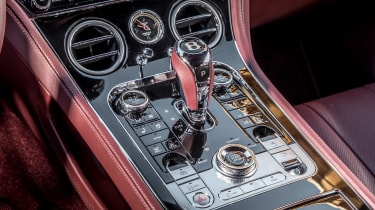 The interior is a real treat too, with a fascia design inspired by the wings of the Bentley badge. The dashboard ‘wings’ sweep out from the central console housing the major controls and the large touchscreen, and continue into the door trims, circling the occupants with a ring of wood and leather. There’s a vast range of luxurious leather and veneer finishes, too.

As you’d expect there’s a wealth of new tech built into the latest Continental GT, and it’s all shared with the other luxury models that share this platform. As well as the formidable chassis tech, there’s an array of bang-up-to-date infotainment and safety systems that are a match for anything else on sale, which is not something that could be said with any conviction about the ageing previous-generation Continental models.

One of the highlights of the Bentley’s cabin is a 12.3-inch touchscreen infotainment system. It’s permanently on display in standard spec, but the Rotating Display option means it’s hidden behind the wood veneer dash when the engine is switched off, and only swivels into view when you fire the car up. If you want a more ‘classic’ feel, you can rotate it again to reveal a third face, which is a veneer panel housing three analogue instruments – chronograph, compass and temperature gauge. When hidden, the navigation mapping can be shown on the digital screen between the instruments in front of the driver, making the Rotating Display a neat option.

The infotainment system comes packed with features including Apple CarPlay and a range of apps, while a head-up display system is optional too. 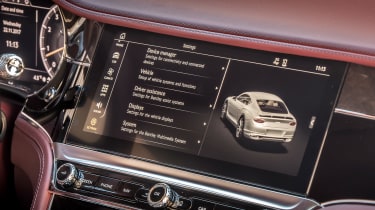