Best American cars of all time

When America gets a car right it's something to behold. Here are our top ten cars, stateside 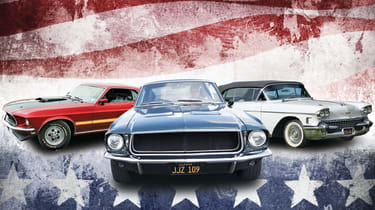 The culture surrounding American cars is incredibly diverse, and it can mean different things to different people. The quintessential US motor is the American muscle car, with monstrous V8s and aggressive styling. But other iconic looks include the chrome and fins of the 1950s, the Al Capone gangster era, and of course hot-rod and drag racing machines as well.

Meanwhile, there are historic American cars to consider from the birth of the motor car, such as the unmistakable Model T Ford. Fast forward to the present day, and there are cars that point towards an exciting future, like the electric Tesla Model S.

Motorsport has also been an avenue for great American cars, with none other than the Shelby Cobra and Chevrolet Corvette at the forefront of some racing icons. NASCAR though represents the ultimate in US racing, making stars out of accessible everyday motors. The rebirth of the Ford GT in the early 2000's also proved America can make a proper supercar.

Here in the UK though, it’s usually the outlandishly styled classic American cars that prove popular with British drivers, with the prospect of a V8 soundtrack only adding to the appeal. Well-known models like the Ford Mustang, Chevrolet Camaro and Dodge Challenger often come with high price tags, while everything else derived from the US market can usually be found hidden away in the classifieds.

And thanks to the trend of US manufacturers ‘globalising’ their products, new American cars are becoming popular here too. Jeep has been around in the UK for years, while Chevrolet - and more recently Tesla - are relative newcomers to these shores. You'll be able to buy the new mid-engined Corvette ‘officially’ in the UK, and even the Ford Mustang is available here in right hand drive.

So for lovers of all American car brands, and of the new and old American cars they have created, this is our guide to 10 of our favourites.

Click on the links below to explore our Top 10 American Cars, and add your own thoughts in the comments...