Two cars, a strip of runway and nowhere to hide. Everybody loves a drag race. Take a look at the best Auto Express drag race videos here. 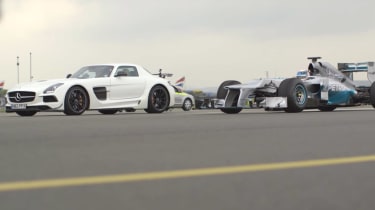 It's not the most scientific test, nor is it particularly relevant to the real world, but there's something special about a drag race. There's nowhere for slowpokes to hide - just two cars, two drivers, and a long strip of tarmac waiting to receive a massive overdose of horsepower and smoldering rubber.

While we mainly focus on in-depth, comprehensive reviews here at Auto Express, there's no shame in having a bit of fun sometimes, which is why we enjoy putting two cars against each other in our drag race videos the ultimate test of straight-line speed.

Some of these races pit David vs Goliath; cars you'd never expect to be in the same league as each other running a surprisingly close race. Other times we race similar rivals against each other to see if a drag race can separate them where on-paper figures can't.

We've got shootouts between tiny hot hatchbacks, performance car heroes, high-powered supercars, and luxury SUVs. We even try out a Formula 1 car to see just how fast these pinnacles of performance are in a straight-line sprint.

Click through the links at the top left or below to see some of the best drag races we've shot, or visit our YouTube channel to watch them all...