Small cars offer Motability users transport to get from A to B, but there's much more to our three picks 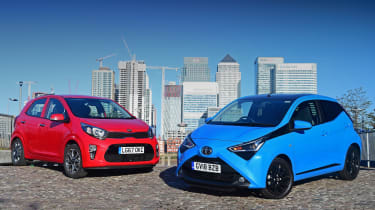 Some Motability users just want to get mobile, so a small car is all that's needed. There are plenty of city cars available on the Motability scheme, and the majority of these come with a nil advance payment deal.

Our picks for the best small cars on Motability offer the most practicality in the city car sector, with wide opening doors and space inside to carry everything you might need, although not necessarily all of it in the boot, so easy-folding back seats are also a highlight. These cars are easy on the wallet as well, with some of the lowest running costs of any cars on sale, and they're not afraid of venturing beyond city streets for longer runs on the motorway, either.

Our top three small cars for Motability customers are listed below… 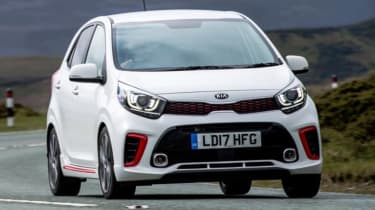 Whichever way you look at it, the Kia Picanto is one of the most affordable cars money can buy. That goes for everything from list price and insurance, to fuel and other consumables – even the brightly coloured option packs offer decent value.

There’s a choice of 1.0-litre three-cylinder or 1.2-litre four-cylinder petrol engines, though the smaller unit is very sluggish at higher speeds.

There’s no three-door Picanto model and access via the wide-opening rear doors makes getting in and out of the back infinitely easier. There are two seating configurations; with the four-seat model offering improved emissions. The five-seat car is more versatile though, giving buyers the option of carrying an extra passenger if the need arises.

Kia has built a hard-earned reputation for reliability over the past two decades, cemented by a bold seven-year/100,000-mile warranty. In our 2020 Driver Power survey, the Picanto was voted Best city car, with customer feedback highlighting the Picanto’s cabin as a comfortable place to be, with good all-round visibility. Buyers were also happy with the user-friendliness of the physical controls and the functionality of the infotainment – including the sat-nav and smartphone connectivity. 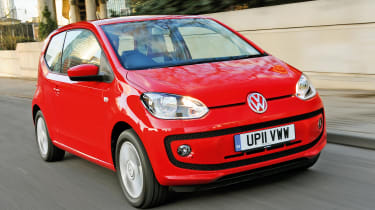 The Volkswagen up! is more sophisticated than its size and looks suggest. It’s comfortable, feels stable on the road and is enjoyable to drive. It’s designed to work in town, but it's not overwhelmed by the occasional motorway trip, although the long gearing does make it labour a little.

Volkswagen doesn’t offer a diesel engine with the up!, so all three and five-door versions come with a 1.0-litre three-cylinder petrol unit under the bonnet - unless you choose the electric e-up!. A five-speed manual gearbox is standard, but the GTI model benefits from an extra ratio.

The small size of the up! means it lends itself perfectly to navigating the narrow streets and tight car parks, so it fits the brief of a city car very well. The tight turning circle makes it particularly good for nipping in and out of traffic and it’s a doddle to park.

There are numerous trim-levels available and VW has introduced some customisation upgrades, allowing buyers to choose from a variety of bold dashboard finishes that contrast with the body-coloured trim inserts on the doors.

While it isn’t as big inside as the Polo supermini, the up!'s versatile interior should prove practical enough. The comfortable, upright driving position and good all-round visibility make it very easy to pilot. 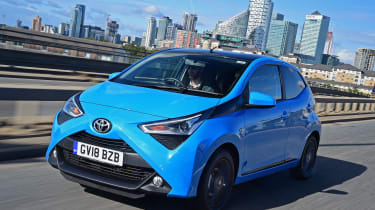 The Aygo is the Japanese city car that shares its running gear with the Citroen C1 and Peugeot 108. But while those two came with the option of a 1.2-litre engine until recently, the Aygo has only ever had a 1.0-litre three-cylinder petrol engine. It's a great little motor that loves to be revved and it has enough power to keep pace with city traffic. Add in super-light steering and controls, and this is a city car that's right at home being hustled around the urban jungle.

It doesn't look bad, either. The distinctive 'X' nose design is eye-catching when compared to the fussy looks of the C1 or 108, while a range of personalisation options, including contrast roof colours and even an opening canvas top, mean the Aygo can really stand out from the crowd.

Like our other picks, you'll have to choose between carrying passengers and luggage, while there are only two seatbelts in the back, making the Aygo a four-seater only. Still, there's plenty of multimedia connectivity up front, while the dinky dimensions mean it's a car that inspires confidence on the road.

Have you ever owned one of our best small cars for Motability? Give us your review in the comments section below...