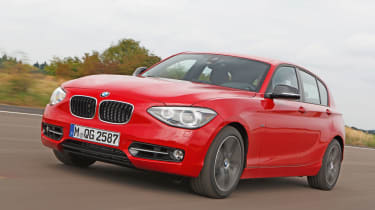 We’ve had our first taste of the future of BMW engines, and we liked it. The three-cylinder engine arrives next year, but it’s part of a family of engines that will replace all of BMW’s three, four and six-cylinder units in both petrol and diesel forms. First signs are that BMW has got it right again.

We've not only seen the BMW CAT concept, we’ve also driven a 1 Series fitted with the 1.5-litre three-cylinder petrol engine that powers the newcomer. More than that though, this is the engine which is set to revolutionise BMW’s model line-up.

The good news is it sounds sporty yet refined, thanks to the use of a balancer shaft to reduce the vibrations that three-cylinder engines normally produce – although the prototype did have a louder engine note than the production model will get.

Chief engineer Lopez Alvarez told us: “I admit it probably is a bit too loud, but we wanted to make a statement: that a three-cylinder engine can be a true BMW engine – sporty and dynamic.”

No final technical data is available yet, but the prototype we drove delivers 175bhp at 5,000rpm and 270Nm at 1,500rpm. This means it can be used in the CAT, 1 Series and 3 Series, as well as the future hybrids and range extenders that BMW is currently working on.

However, the engine is unlikely to make it into the 5 Series due to its heavy kerbweight. “If the power-to-weight ratio forces you to stay in a less efficient rev range, the benefits of having one less cylinder will vanish,” Alvarez said.

Although the test drive was somewhat limited, it was obvious that the new engine offers more than enough performance in a 1 Series. We had no problems accelerating from low speeds in third or fourth gear. The test car was paired with an eight-speed auto gearbox. It shifted up at 6,500rpm under hard acceleration, but was also smooth on the downshift.

The engine will debut next year in the eagerly anticipated i8 plug-in hybrid sports car, and will be available in at least four states of tune. These include 121bhp, 134bhp in the CAT concept, the 175bhp version sampled here and a range-topping 221bhp engine set to power the new MINI Cooper S.