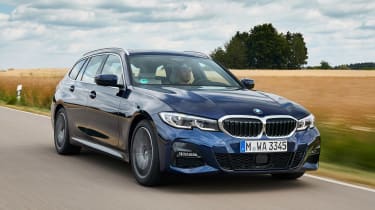 Still the driver’s choice in this family-oriented segment, nothing can match the BMW 3 Series Touring from behind the wheel. It takes this honour while providing a competitive load area, and the 330d has the sort of effortless, six-cylinder diesel shove you expect. It’s tantalising, but we expect the four-cylinder 320d and 320i diesels and petrols will suffice if you’re feeling sensible.

The BMW 3 Series Touring has entered its sixth generation, and while estate cars such as this aren’t quite as popular in Britain as they are in the rest of Europe, this is still a key car for BMW’s UK arm.

The newcomer is expected to account for around one in four of all 3 Series models sold, but it’s also got to steal sales from cars such as the Mercedes C-Class Estate and the recently refreshed Audi A4 Avant. With just the same superb blend of comfort and control as the 3 Series saloon, then, this new Touring model has the potential to head straight to the top of the pile.

Estate buyers will have to pay a £1,500 premium over the saloon to secure the more practical model, and we try it here with the six-cylinder diesel engine as the 330d xDrive Touring in M Sport trim. 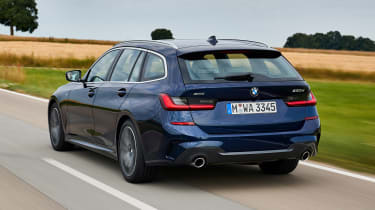 But first, let’s look at that all-important boot. Measured to the parcel shelf, there’s 500 litres of room on offer, which is only five more than before. The Volvo V60 will swallow a touch more with five seats in place and remains the roomiest upmarket compact executive estate out there.

However, BMW has worked on making the space useful, so the area is flexible and feature-packed. The boot lip is low, the tailgate is wide for easy loading, and as in previous Touring models, the rear window can open separately via a button hidden on the rear wiper mounting. New rubber anti-slip rails on the boot floor that keep bags in place without the need for netting are optional, while the rear bench can fold flat electrically at the touch of a button, creating up to 1,510 litres of space.

Importantly though, this practical rear end is attached to something far more important and something that is sure to resonate with plenty of potential buyers: the 3 Series’ chassis.

Compared to the previous-generation wagon, the newcomer is 10kg lighter than before. It’s still a shade heavier than the saloon, and with six-cylinder power the kilos begin to creep up even more, so this isn’t the nimblest version on offer.

That’s something that is apparent and felt on the road, because the front end isn’t quite as sharp as we know the 3 Series saloon’s to be. The steering is a little short on feedback, but nearly all modern systems are like this, and the BMW’s set-up is good enough, with a pleasing weight, speed and accuracy when you turn the wheel.

It rides well, too, offering a great compromise between strong body control and cruising comfort. Adaptive, stroke-dependent damper technology means that selecting Comfort mode offers a genuinely refined ride when you want to take things easy. M Sport cars sit on 18-inch wheels as standard, and we’d stick with them rather than move up to the 19s. 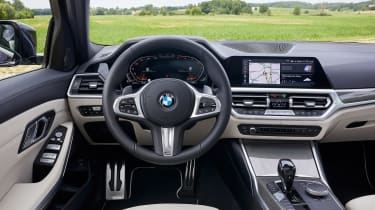 The difference in the way the suspension and body respond to inputs and cornering in Sport mode is noticeable. It means this isn’t just a BMW that’s good to drive on a twisty road – it’s enjoyable to drive almost anywhere. Our Bavarian test route didn’t quite simulate the worst of British B-roads, but we’re told that the UK’s scarred tarmac, and Wales in particular, is somewhere BMW’s chassis engineers are spending more time, so things bode well for the new Touring’s UK debut later this year.

Throw in the 330d’s 3.0-litre turbodiesel engine and the end result is somewhat cliched: this is all the 3 Series you could ever need. Don’t pay too much attention to the 261bhp figure. The 580Nm of torque spooled up by this silky six-cylinder is what will grab your attention. You can consistently summon thrust and a pace that’ll worry bona-fide performance cars. And while the sensible thing would be to compromise, save money, and opt for one of the more frugal four-cylinder diesels, the punchier 330d will only cost around £50-£70 extra per month (depending on deposit) on a PCP deal. And in our eyes it’s worth every penny.

Elsewhere, the interior remains as strong in presentation and execution as in the saloon, mixing good materials with a sense of high build quality, all integrated into a neat and practical design. The 12.3-inch digital dials aren’t the best in the business, but the iDrive infotainment system – now in its seventh generation – still is. It’s pinpoint sharp, fast, easy to navigate and comes with new features on the 3 Series Touring. It rounds off what is a very strong and highly desirable all-round family car.