Leg and head room are better than before, with the 3 Series now matching or beating its rivals for interior space

The 3 Series is bigger than it was before, and the main focus for BMW has been on improving accommodation for those in the back. As a result it now offers similar levels of space as the Audi A4 and the Mercedes C-Class. BMW says the 3 Series is now wide enough to accommodate three child seats side by side in the rear, but only the two outside positions come with Isofix points.

Both front seat occupants should be able to find a comfortable position with a good range of seat adjustment and a steering wheel that’s adjustable for height and rake. The standard upholstery is cloth, but both Sport and M Sport models come with Vernasca leather and all models receive heated seats.

What has changed significantly for the BMW 3 Series is that its wheelbase has been extended by 41mm, which gives more leg room for rear passengers. Indeed, it now has the longest wheelbase of the three cars. In addition to this the car’s front and rear tracks have also been widened in the quest for improved ride and handling. 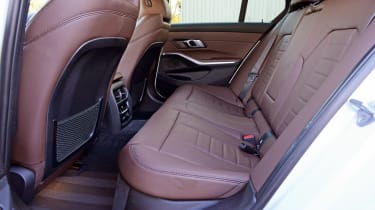 There should be no complaints on the amount of headroom though, as the 3 Series offers a few millimetres more than either the Audi A4 or Mercedes C-Class. There’s plenty of room for storing oddments too, with decently sized door pockets.

The driver and front seat passenger fare very well with comfortable and supportive seats. So far we’ve only sampled the sports seats that come in the Sport and M Sport models, but we would expect the standard seats to be comfortable as well. One slight disappointment is that lumbar support is an option rather than a standard feature. 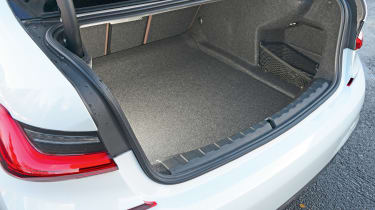 While the 3 Series has grown in size, the same cannot be said of its boot, which stays at 480 litres – the same as the previous generation model. It should be more than adequate for most buyers without being class-leading. The Audi A4 has an identically sized boot but the C-Class falls a little short of its rivals with a 455-litre capacity.

As standard the 3 Series comes with 40:20:40 split folding rear seats that improve its practicality. If you opt for the Comfort package (around £1,000) you get extended storage with some handy nets in the boot compartment along with an electrically operated boot lid that can be opened by swiping your foot under the rear bumper.