The BMW 3 Series has long been the default choice for those looking for an entertaining driving experience from their compact executive saloon. And for the most part, this latest incarnation of the 3 Series retains its crown as being the drivers’ car in the class. However, BMW has also attempted to increase refinement and ride quality to match the Mercedes C-Class. It’s a tough job to retain the 3 Series’ sporting appeal while also raising the bar in the comfort stakes.

Remarkably, BMW seems to have pulled it off, as the 3 Series is still a very entertaining car to drive, with impressive road holding yet with an improved ride quality over its predecessor. Part of this improvement is thanks to BMW’s new stroke-dependent suspension damper technology, which is a standard feature on all models. When the car is carrying a light load, the damping rate is softer, resulting in a compliant ride.

However, when the car is fully laden with passengers and luggage, the damping is stiffer to take into account the heavier load, which results in appreciably better body control without unduly affecting the ride quality. For the most part it works very well, but part of the improvement in the 3 Series’ ability is also the result of using BMW’s latest CLAR platform. This has reduced weight – by up to 55kg – and increased body rigidity by up to 50 per cent. It’s an impressive feat given the 3 Series is larger than its predecessor.

The 3 Series lives up to the driver appeal expected of the model with excellent poise and agility, comfortably beating both the Audi A4 and Mercedes C-Class in this respect. But like its rivals it does suffer a little from having slightly lifeless steering that doesn’t offer keen drivers a huge amount of feedback. Despite this, the 3 Series is still a drivers’ car with excellent grip and composure. And while the steering rack lacks feel it is quick, allowing accurate and rapid corrections to your cornering line. 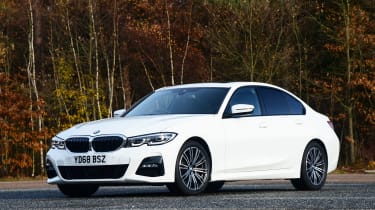 This can be improved by opting for one of the models with BMW’s xDrive four-wheel drive system, which makes the 3 Series even more surefooted no matter the conditions.

Two transmissions are offered – a six-speed manual or an eight-speed ZF automatic – but the manual is only available on certain lower-powered models. The manual is an improvement on the previous generation’s slightly notchy change, while the automatic is an excellent transmission with smooth changes throughout, whether the gearbox is left to its own devices or whether changing gear manually with the steering wheel-mounted paddles.

On the motorway the 3 Series is an accomplished cruiser, offering lower noise levels than it exhibited previously, which is in part thanks to the standard fit acoustic glazing. The ride is good too, and while in the past we might have recommended the optional adaptive dampers, this is no longer necessary thanks to the stroke-dependent dampers. On the largest wheels there is an occasional thump from the worst potholes, but it’s certainly no worse than its rivals in this respect.

There's no M3 for now so those after performance will be best served by either the M340d or M340i. Both are effortlessly fast and – thanks to standard xDrive four-wheel drive – have loads of grip and traction.

However, it's best to consider this pair as fast, capable cruisers, as they're good to drive but don't feel much different to M Sport models. Adaptive suspension is standard making for great ride quality if Comfort mode is selected. Things sharpen up in Sport and while some may find it a little uncomfortable, it offers a marked improvement in dynamics on the right piece of road.

The sporty M340i has a 3.0-litre straight-six with 369bhp – 0-62mph takes just 4.4 seconds. All petrol models use an eight-speed automatic and the 320i can be specified with xDrive four-wheel drive; M340i models get four-wheel drive as standard.

The 318d and 320d use 2.0-litre diesel engines producing 148bhp and 187bhp respectively; these four-cylinder diesel 3 Series models come with a choice of six-speed manual or eight-speed automatics; all but 318d models can be fitted with four-wheel drive. 0-62mph takes 8.4 seconds in the manual 318d or a tenth slower in the auto, while it’s 7.1 seconds in a manual 320d or 6.8 seconds with the automatic.

Performance-conscious diesel buyers will be best served by the 330d, which gets a straight-six with 261bhp. 0-62mph takes 5.5 seconds in the rear-drive car or 5.1 seconds in the four-wheel drive version. This six-cylinder unit also features in the M340d xDrive, producing 335bhp and dispatching the same sprint in 4.6 seconds.

The plug-in hybrid 330e is powered by the four-cylinder petrol from the 320i, but adds an electric motor to produce a total output of 249bhp. 0-62mph takes 5.9 seconds and the car’s battery provides a claimed 41 miles of all-electric running.

The Touring estate is slightly heavier than the saloon and so performance figures suffer ever so slightly, with a few tenths chopped off 0-62mph times. You won’t notice the difference in the real world, though.

The 320d will be the default choice for many drivers, despite the diesel backlash, and it’s easy to see why as it offers an excellent blend of performance and economy. The engine is reasonably familiar as it’s used in many BMW models, but has been upgraded for the new 3 Series with a number of revisions. It produces 187bhp and 400Nm of torque, which means a 0-62mph time of 7.1 seconds for the eight-speed automatic. That’s considerably quicker than the Audi A4 40 TDI, which takes 7.7 seconds to cover the same increment. 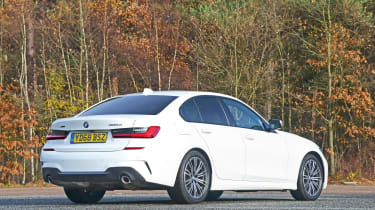 The previous generation 320d was a little noisy for our liking, but there have been improvements for this new model and it is quieter than before, only sounding a little grumbly when extended. On the move the engine is generally very refined and with additional soundproofing and the acoustic glazing, it’s a hushed companion at motorway speeds.

The manual gearbox is nothing to write home about – it does its job and has a pleasant action – but we’d advise opting for the eight-speed automatic. It changes gear very effectively both in manual and automatic modes and it makes the best use of the available torque from the engine.

The petrol-engined 330i is quite a performer with its turbocharged four-cylinder engine developing 254bhp and the same 400Nm of torque as the 320d. It will accelerate from 0-62mph in 5.9 seconds and has a top speed electronically limited to 155mph. It’s only offered with an eight-speed automatic gearbox and is a very willing performer. And despite BMW’s move from six- to four-cylinder engines for its 330i models, the engine still feels willing and eager, if not quite as tuneful as the old six-cylinder unit.