The latest 3 Series offers decent economy across the board; driven sensibly, even the sporty M340i can get very close to 35mpg on average. CO2 emissions are relatively low – good news for private buyers and company car users alike. All quoted figures here are for the saloon – Touring estate buyers should factor in a slight dip in economy and an increase in emissions on account of the extra weight.

The 320d SE, with mild hybrid tech, is the most economical choice, with a claimed maximum of 60.1mpg and CO2 emissions from 123g/km. Adding xDrive to the spec brings a further emissions increase to 130g/km – along with fuel economy of 56.5mpg. It’s worth sticking with the rear-drive option unless you plan to make regular use of the four-wheel drive system’s improved traction in inclement conditions. 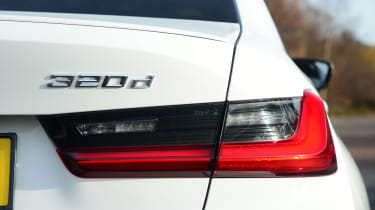 The powerful 330d does not suffer too much in terms of economy despite its six cylinders and 261bhp. Rear drive models return a maximum 47.9mpg and emit 154g/km of CO2, while xDrive models take a slight dip in fuel economy and release eight more grammes of CO2 per kilometre.

Those that are seeking even more grunt won't be left too short-changed, the M340d xDrive manages to combine a 335bhp output with an outstanding 44.1mpg on the combined cycle.

The most efficient of the petrol engines is the 318i SE with a claimed 44.1mpg and 145g/km of CO2. Almost the entire petrol engine range sits around this economy range; even the 330i returns up to 41.5mpg on average, with CO2 emissions from 154g/km.

The M340i is the least efficient model in the range, but still achieves a respectable 34.9mpg, with CO2 emissions of 185g/km.

The 330e plug-in is capable of travelling over short distances without using any fuel – its battery will provide 41 miles of electric range when fully charged. It’s this ability that helps the 330e achieve its impressive 176.6–201.8mpg claimed economy and 37g/km CO2 emissions – though you’ll be hard pressed to match these figures in real life on longer journeys. It’s definitely the best choice for lower-mileage, shorter-distance drivers, however – keep your battery charged up and you could conceivably not use any fuel at all on shorter journeys.

Insurance groups for the 3 Series saloon and Touring models are competitive and range from 25 to 39, although ratings for the 318i petrol models have yet to be confirmed.

Thanks to the lure of the premium badge the BMW 3 Series has never suffered from terrible rates of depreciation, but as with the C-Class and the Audi A4 the sheer number of these premium models being sold each year has ultimately had a slight softening effect on their residual values.

The average retained value for the range after three years and 36,000 miles is around 45%, with the 318i petrol and 330e plug-in hybrid models holding on to nearer 50%.