Improvements in interior quality and technology are very welcome, but the styling is a little underwhelming

The 3 Series is now based on BMW’s CLAR (short for Cluster Architecture) platform, which was first introduced on the flagship 7 Series in 2015 and is also used for the 5 Series executive saloon. The car is available as a four-door saloon and as a five-door estate, badged Touring.

The latest car features an interior that feels like that of the 5 Series and 7 Series, and that’s no bad thing as both those cars have an excellent, high-quality feel to them. The 3 Series has a more driver-centric feel to it than the Audi A4 and is less fussy and more straightforward than that found in the Mercedes C-Class, too.

The dashboard design works seamlessly with the new technology on board, and all cars come with sat nav (an 8.8-inch touchscreen in SE and Sport models, 10.25-inch in the M Sport) and BMW’s new Intelligent Personal Assistant, a voice controlled set up that allows you to communicate with the car as you would with Apple’s Siri or Amazon’s Alexa. Thus you can adjust the temperature, change the audio settings or talk to the sat nav amongst other things. If you prefer you can still use the iDrive controller which is intuitive and easy to use.

M Sport models come as standard with BMW’s new Live Cockpit Professional, which includes a 12.3-inch digital dashboard display that allows you to fully customise the information displayed and offers a higher level of functionality than in SE or Sport models. What is a little disappointing is that this Live Cockpit Professional cannot be added as an option to the SE or Sport models. These receive more traditional analogue instruments with a smaller central digital display. 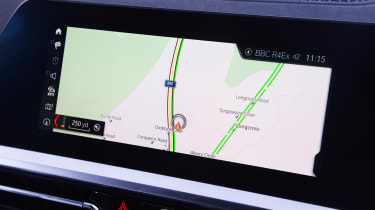 Non-metallic paint is standard on all models bar the M Sport Plus Edition, and if you want to add metallic to an SE or Sport model it’ll cost around £670.

Long gone are the days when a 3 Series didn’t even come with a stereo or speakers, as all models are now packed with an array of hi-tech equipment. There’s sat-nav (with a 8.8-inch central screen on SE and Sport models, 10.25-inch on the M Sport) and Bluetooth – both for calls and music streaming – along with USB charging points.

A DAB radio comes as standard, as does BMW’s Connected+ which gives you access to BMW Apps as well as its online services. Emergency Call will automatically call the emergency services in the event of an accident. Apple CarPlay is standard across the range but disappointingly Android Auto is not currently available, although BMW is looking to add this function to certain models in the future.

The stereo along with many other functions can be accessed via the central control display acting as a touchscreen, or you can also use voice commands and the iDrive controller. While it can seem a little bewildering at a glance, those coming from a previous generation 3 Series will have no trouble operating the system and it soon all becomes second nature once it’s been used for a couple of days.