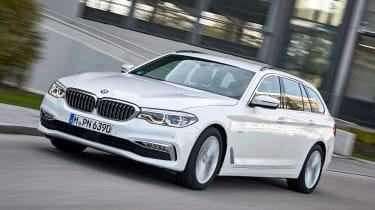 In a world of SUVs and crossovers, it’s easy to forget the usefulness of a more conventional estate car. But the new BMW 5 Series Touring underlines that there’s life left in the wagon yet. This could well be the perfect family car, in fact, mixing plentiful space and loads of practical touches, with impressive refinement and driver appeal. The high-quality interior is exactly as it should be, while a strong kit list will leave buyers wanting for nothing.

BMW has sold over one million 5 Series Tourings since it was first introduced in 1991, which equates to lots of trips to the tip. With the new version that journey should be even easier, thanks to a boot that has seen its capacity raise by 10 litres (to 570 litres) with the rear seats in place and a maximum of 1,700 litres with them folded.

It’s not just the volume that’s up, either, but the weight it can carry, too. BMW has boosted the 5’s load limit by 120kg to 750kg – the standard rear air-suspension with self-levelling helping to achieve that.

It’s bigger, but not quite able to match the 640/1,820 litres of the Mercedes E-Class Estate, which has traditionally offered the biggest boot in this most practical of premium class sectors. Not that your 5 Series buyer is likely to mind, as for all its practicality, the Touring has always been the load-lugger of choice for keen drivers. Even so, the reality is that most models come powered by a four-cylinder turbodiesel, with many owners still concerned with economy and emissions. 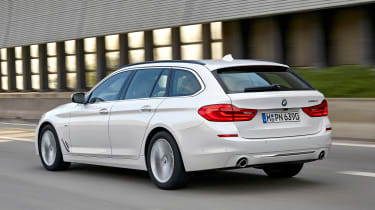 So the 520d Touring is the mainstay of the range, and it’s the car we’re driving here. While we’d all like the 530d with its more prodigious punch and rousing six-cylinder growl, it’s a sizeable £8,000 more than the 520d, which is a premium that’s difficult to justify. Jumping out of the 530d and into the 520d is pretty revealing, because you don’t feel in any way short-changed.

In fact, the 520d’s 187bhp and 400Nm feel more than capable of shifting the bigger 5 Series with real conviction, despite its 74bhp and 220Nm drop over the 530d. It’s quieter, too; the 520d is so hushed it’s all but silent. The transmission is similarly slick; the eight-speed auto’s imperceptible shifts are just as impressive as the lack of noise from under the bonnet.

It’s brisk, too. The 0-62mph dash is over in 7.8 seconds, with the engine’s torque and that transmission’s quick shifts meaning you’re rarely left wanting for speed. There’s all manner of safety systems under the Driving Assistant Plus banner to ease the monotony of a motorway cruise, but the 5 Series is much better enjoyed when you’re driving it yourself. Specs mirror the saloon, so all cars come with Professional Navigation, BMW Online Services and climate control.

Taking the Touring off the motorway and on to a stretch of country road is immensely revealing. The chassis – despite its differing rear suspension – still exhibits the agility we’ve come to expect from a 5 Series; even if the 5’s growing proportions mean it feels big on narrower roads. It remains sharp though, with little body roll and nicely direct steering. It’d feel even better if you didn’t hold on to a wheel that’s so expansive in its girth that it feels like it’s been wrapped in spongy pipe cladding, though.

Enjoyable, quiet and more economical, the 520d emits just 114g/km and is able to return as much as 62.7mpg on the official combined consumption cycle. Those numbers translate to a competitive 24 per cent tax rating for company car drivers, which is only one per cent behind the super-frugal Mercedes E 220d Estate.

While the fuel economy returns will be less in reality, the gains are thanks to BMW’s commitment to weight reduction. The 5 Series is around 100kg lighter than its predecessor; the tailgate alone dropping by 4kg over the old car. BMW’s engineers have achieved that loss at the back without dropping the opening rear window, either – a useful feature for loading in items without fully raising the bootlid.

There’s the now obligatory kick-opening function, which will open the boot if you’ve got the keys on you, by sliding your foot under the rear bumper. However you choose to open it, the boot comes with a usefully wide aperture. The seats fold in a 40/20/40 split to reveal a handy flat load bay. Do that and the luggage cover and cargo net stow neatly under the floor, too.

BMW also claims that there’s room for three child seats across that rear bench. While that might be true, the essential Isofix mounts are only found on the two outer ones. Legroom and headroom is plentiful for adults, however.