The addition of four-wheel drive doesn't really change much to the Mercedes E-Class Estate's formula, but it's still a refined choice 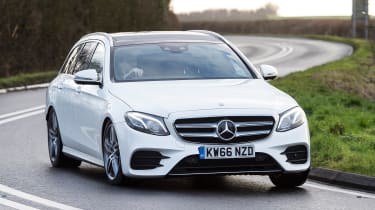 The E 220d 4MATIC is a strong choice for those after a comfortable and impeccably finished large estate with all-wheel drive. It might not be top of the class in terms of the driving experience, but the Mercedes remains hugely practical and very refined. We’re not convinced the advantages of all-wheel drive are as obvious here as they are in comparable SUVs, however, so the cheaper, more economical and almost as capable rear-wheel drive E-Class Estate is the better bet.

A decade ago, British buyers who demanded that their executive estate have power sent to all four wheels were mostly forced into Audi’s quattro camp. Nowadays, though, there are plenty of brands offering all-wheel drive estates, not least Audi’s closest challengers BMW and Mercedes. Here, we’re driving the latest effort from the latter; the 2017 E-Class estate in popular ‘220d’ form with 4MATIC all-wheel drive, to work out if it is worth bothering with.

Despite a relatively mild winter weather in the UK, a steadily increasing number of people are choosing all-wheel drive as an option on new cars. You can blame the rise of the crossover for that – but it’s also thanks to modern ‘part-time’ AWD systems that are almost as cheap to run as the same model with two driven wheels. That last point means that this E 220d 4MATIC – which can still send torque to any driven wheel that loses traction - manages a claimed 54.3mpg on the combined cycle and emits 137g/km of CO2. 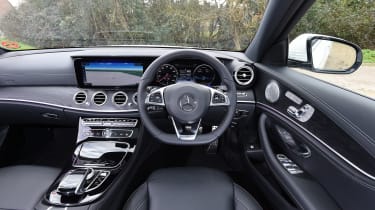 While those figures are better than any similarly sized diesel SUV, there is still a slight penalty over the standard E 220d, which officially manages 61.4mpg and emits 129g/km. As such, the 4MATIC is unlikely to be a company car favourite, with a 3 per cent higher Benefit in Kind (BIK) rate than the two-wheel drive car. More disappointing was the fact that we only just managed to break 40mpg over a week with the 4MATIC in a mix of largely gentle motorway and town driving.

The benefits on the road may just outweigh the economy sacrifice for some, however. Grip levels are very impressive, with the heavy E-Class firing off the line with only a hesitation from the nine-speed automatic gearbox to hinder its progress. It feels planted in the bends, too, with any instability or movement under power found in the standard E all but eradicated, though in normal driving you would be hard pushed to notice any difference. If you want to tackle rough terrain, this isn’t the right AWD E-Class to buy – there’s the forthcoming All Terrain model for that. 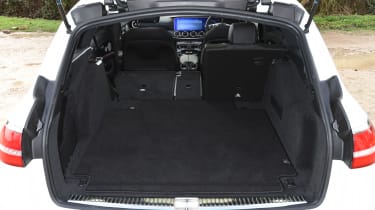 The introduction of the 4MATIC running gear seems to have no effect on the Merc’s fluid and composed ride quality (on our air-sprung test car at least). Performance is very similar with only 0.1s lost on the 0-62mph time when compared with the rear-wheel drive model. It’s far from fast by the standards of the modern Executive segment, but the refined E 220d offers a reasonable turn of pace that is fine for most buyers’ needs. While it’s disappointing that the adoption of 4MATIC doesn’t boost the E-Class Estate’s towing capacity of 2.1 tonnes, that’s still better than an xDrive-equipped BMW 520d and an Audi A6 Avant 2.0 TDI quattro when it comes to pulling a trailer.

With no visual clues on the interior that this is an all-wheel drive car and only a ‘4MATIC’ badge on the bootlid, the only other drawback is the price: at £42,710 it’s £1,540 more expensive than the two-wheel drive E 220d. A good PCP deal will help mask that, but we reckon that money’s better spent elsewhere in Merc’s extensive options list.