The BMW X4’s strongest hand is its ability to tackle a winding road. Its standard-fit xDrive all-wheel drive system generates vast amounts of grip and it inspires huge confidence in bends.

With BMW’s Driver Performance Control system there’s also a selectable Sport mode that gives the steering extra weight, although there's next to no feedback, sharpens the throttle response and speeds up the gearshift times on automatic models for a more engaging drive. It’ll also stiffen up the suspension if you specify BMW’s optional Dynamic Damper Control feature.

Throw in a lower centre of gravity and a revised suspension set-up over the already impressive X3 and you’ve got a genuinely entertaining and involving SUV to drive. It’s the brakes that let the side down though, as they feel a little underpowered when repeatedly asked to slow an almost 1,900kg car – 260kg heavier than the already hefty Range Rover Evoque. 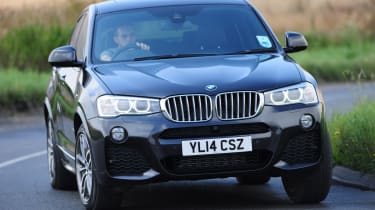 A six-speed manual gearbox is available with the entry-level 2.0-litre engine. Otherwise, the X4 is fitted with an excellent eight-speed automatic transmission. All versions get BMW’s xDrive four-wheel drive system, which is biased towards the rear wheels for sportier handling but can also send up to 100 per cent of power to either axle in a matter of milliseconds should the stability control demand it.

Despite the four-wheel drive, don’t expect the car to venture far off-road. Especially in M Sport trim, as the chunky bumpers and low side skirts limit the BMW’s ground clearance, while the big wheels and road tyres mean a muddy track is about as much as the X4 can handle.

BMW offers two six-cylinder diesel engines with the X4 and a solitary four-cylinder diesel. The entry-level X4 20d is the smallest engine of the range but the 187bhp X4 20d is not a slow car, as it’s capable of 0-62mph in 8.0 seconds and has a hearty 400Nm of torque, which means strong mid-range performance.

That said, the lustier 30d and 35d six-cylinders are more tempting due to their effortless pace and quieter cruising ability. The 254bhp X4 30d offers all the grunt you could realistically need – the 0-62mph sprint takes just 5.8 seconds, while the top-end 309bhp x35d M Sport shaves the 0-62mph time down to 5.2 seconds.