The 2017 Frankfurt Motor Show has been a hectic affair, but the Auto Express team has still found time to pick out the best cars… 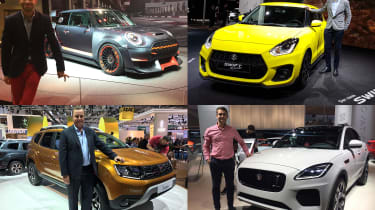 After much hype and expectation, the 2017 Frankfurt Motor Show did a thorough job of delivering the goods. The flurry of press events and media launches within the vast halls of the Frankfurt Messe turned up some fantastic new cars. And it made the job of choosing the best cars at Frankfurt 2017 all the harder.

Concept cars appear to have dominated the stands at the 67th IAA (International Automobile-Ausstellung), with the likes of the BMW i Vision Dynamics, Audi Aicon, Honda Urban EV, Kia Proceed, Mercedes EQA, MINI Electric, Renault Symbioz, Skoda Concept E and VW I.D. Crozz II among the many designs previewing the future of the automotive industry.

• All the news from the 2017 Frankfurt Motor Show

And who could forget the 986bhp, F1-engined Mercedes-AMG Project ONE hypercar? Still technically a concept at this stage, the £2.4 million monster gives us a clear impression of what the final design will look like when it hits the road in 2019…

With all those contenders to consider, our team has had a tough time picking out the best cars of the 2017 Frankfurt Motor Show. Nonetheless, everyone has chosen a favourite - have a read of our choices below... 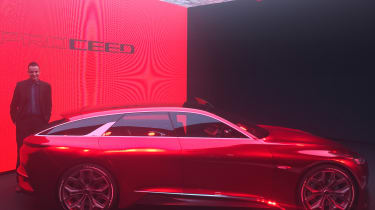 Kia billed the Proceed concept as an ‘extended hot hatch’ that hints at the styling of the next-generation Cee’d. What it also points to is a shooting brake version of the Cee’d that has every chance of making production. With sales of three-door hatches on the wane the company is keen to reimagine the current Pro_cee’d, and Kia Europe design boss Gregory Guillaume told me that it “had come up with a lot of answers internally”. However, none could possibly be as pretty as this stylish model which, once it makes production, should inject a genuine dose of desirability into the Kia line-up. 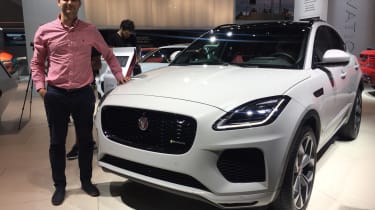 Jaguar Land Rover is onto a winner. Everything it touches at the moment turns to gold, and I reckon the same will prove true of its latest SUV: the E-Pace. Last year, we awarded the larger F-Pace our overall Car of the Year gong, and the E-Pace looks as if it could be in with a chance of repeating that success in 2018. Taking all the best bits from its bigger sibling, the sleek and stylish E-Pace looked great on JLR’s busy Frankfurt show stand. It’ll be built on an adapted version of the Range Rover Evoque platform, and the brand’s team of talented engineers will have a challenge on their hands to make it as dynamic and fun to drive as the F-Pace. But I for one have every confidence they’ve got what it takes. I really can’t wait to drive it. 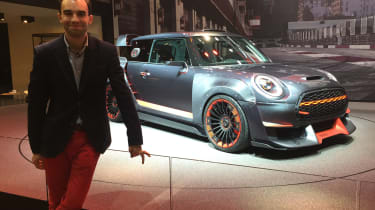 With seemingly every manufacturer unveiling a car powered by electricity in some sort of way at Frankfurt 2017, it was a relief to see that MINI still has the heart to show off something daring and petrol-powered. At one end of its stand stood the all-electric MINI Concept; firmly at the other was the MINI John Cooper Works GP Concept. It hints at a potential future third-generation MINI GP, and while it does boast some frankly ridiculous costume jewellery it’s a seriously exciting prospect. It's just further proof that the hot hatch isn’t dead just yet. 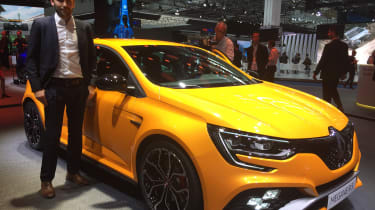 The Megane RS was the perfect tonic to a motor show filled with electric cars and pie-in-the-sky concepts. Renault seems confident that the RS can set a new lap record for a front-wheel drive production car around the Nurburgring; the brand’s rich history of hot hatches means we can believe what it says, too. It may not be the most powerful car in its segment but Renault has always shown that a good chassis and modest kerbweight counts for more. 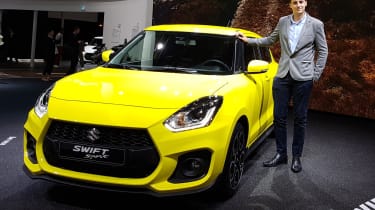 Frankfurt is packed full of fast and exciting metal to keep enthusiasts coming back for more, but not all of it is attainable. I prefer my thrills to come from something small, light and affordable, so the new Suzuki Swift Sport is definitely my sort of car. It’s now in its third generation, and continues to offer a sub one-tonne kerbweight and a manual gearbox, and is expected to start from around £16,000. With 138bhp it won’t set the road alight, but the torquey 1.4 Boosterjet turbo petrol should make both more fun and more useable every day. 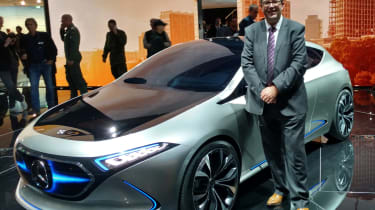 This seemed like the Frankfurt show where everyone wanted to talk not about now, but about what’s coming in 2025. But the good news is that Mercedes’ EQ all-electric sub-brand is due in a shorter timeframe than that (about 2019) - and I reckon that the Concept EQA shows promising signs of how it could deliver real desirability to lots of new EV customers.

The hatchback concept has some show gimmicks, such as a ‘front grille’ screen that can change its display depending on which of the car’s modes is being used. But for me, the most refreshing thing about the EQA as a Mercedes is the shortage of creases or lines along its bodywork. It’s a pure, unfussy shape that promises to bring sophistication to match its environmental credentials. I can’t wait to see what the cabin looks like. 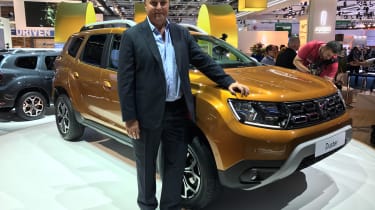 I’ve always been a fan of the Duster – a good value, uncomplicated 4x4 that makes pretty much every other SUV look expensive. Now it’s been reinvented with an element of style that could well turn this into one of the coolest SUVs on the market.

The new design is evolutionary, but with enough interesting curves and some delightful details (especially the lights) that give it a more upmarket look – yet the price will remain anything but.

I’m a particular fan of the clever interior; for example, the vents that are cheaper to make yet look better than ever. And there’s been a big tech upgrade, too, including a new touchscreen and, whisper it, some luxury kit like keyless entry. It’s just a shame we have to wait until next year to get our hands on it.