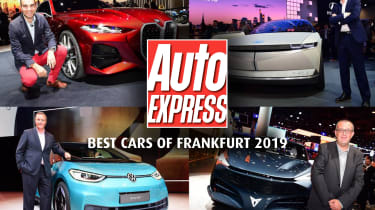 The 2019 Frankfurt Motor Show delivered once again and it wasn't just the German brands making a statement at their home event, as manufacturers from across the globe - some more familiar than others - took the covers off a vast array of new metal.

As expected electric cars were the centre of attention with the new Volkswagen ID.3 and Porsche Taycan attracting plenty of visitors, while there were also world debuts for the Vauxhall Corsa-e and the production-ready Honda e city car.

However, the combustion engine still lives on and arguably the biggest news at the show was the arrival of the all-new Land Rover Defender. There was also the 808bhp Lamborghini Sian - albeit with a hybrid powertrain sitting beneath its skin - and the new 592bhp Audi RS 7 Sportback.

As is the norm at motor shows, it wasn't just production-ready metal on display, as the halls were filled with concept cars from most of the manufacturers present. The retro Hyundai 45 concept and the striking Cupra Tavascan both previewed future models from the brands, while the Audi AI:Trail quattro gave a glimpse of how future Audi SUVs could look.

With so many cars on display, it was hard to know where to look first, but the Auto Express team have picked out the cars that really stole the show in Frankfurt. 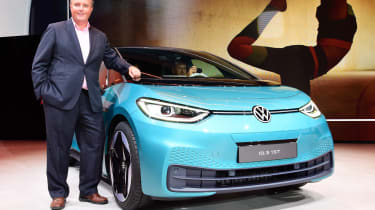 It’s fair to say we had a good idea what the Volkswagen ID.3 was going to look like – you’d have to live on Mars to have missed out on the ID concept being shown at every major show for what seems like years, and the ad campaigns warming us up for the arrival of VW’s first electric car. However, seeing it for real for the first time on the Frankfurt show stand was a real pinch-me moment. As much for the importance of the car as what it looked like, which for the record I like a lot.

It’s no underestimate to say that this car is the most important VW to launch for a generation - or two. I could have done without the hoorah around the new brand logo – a pointless exercise in my view. But the real story is an electric car for the people: cool, connected, clever and by the sounds of things pretty affordable, too. Of all the cars in Frankfurt, it’s the one I’m looking forward to driving most of all. 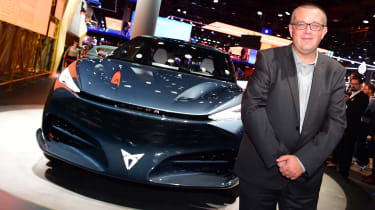 Cupra still feels like a brand that’s trying to define itself, and the fact that the SEAT Leon Cupra is still on sale only muddies the waters further. But the company showed a clear future direction at Frankfurt with the Tavascan, a pure-electric crossover that sits on the same MEB underpinnings as Volkswagen’s new ID.3.

The Tavascan’s looks have split opinion, but as a statement for a badge that wants to stand apart from SEAT, I think it’s a solid success. Tone down the cabin a little and you’d have a more rakish pure-electric SUV than anything on the market. And that, it appears, is precisely what Cupra wants to do. I’m told that a decision on a production version of the car should be made before the end of this year. But the design team has already done the hard work on that score to make it realisable, and they’d be crazy to not commit. 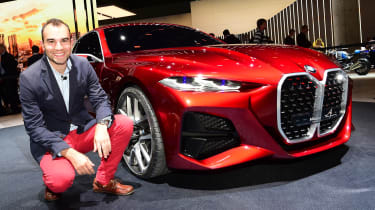 While everyone was swooning over the new Land Rover Defender and VW executives were patting themselves on the back after the launch of the ID.3, it was a different story at the bottom end of Hall 11 at the Frankfurt Motor Show. Not only did part of the BMW stand fall down with a deafening crash, but also the German brand revealed easily the most controversial car of all.

Soon after the covers were pulled off the Concept 4, journalists were seen scurrying around the motor show with their noses turned upwards, in a similar fashion to the BMW’s front-end, actually. Some said the new double-kidney grille looked like two, inflamed nostrils after a nasty, virulent disease, while others said it looked like Bugs Bunny’s teeth.

At first, the new grille revolted me, and then I warmed to it, and then I was revolted once again. And that’s why I’ve chosen it as my show star. While the Defender, ID.3, Mercedes Vision EQS and Byton M-Byte were all loved, the BMW polarised opinion – and that’s surely the point of a concept car. Whether BMW will actually carry on with the look for the production version of the 4 Series Coupe is another matter. For me, it was a winner. 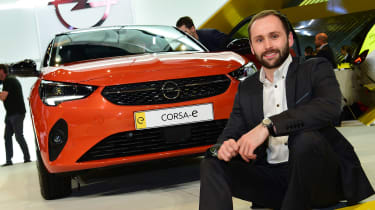 The new Corsa-e had to fight for attention at Frankfurt sharing a hall with the reborn Defender and the head-turning, whichever way you look at it, BMW Concept 4. But interest in the latest Corsa - Frankfurt being its first public outing - was far from limited. It’s perhaps because the electric supermini was one of the few affordable, real-world production cars on display at this year’s IAA.

Developing a small EV that can cover 211 miles on a single charge, carry a small family and be genuinely desirable is a significantly harder task, from an engineering as well as marketing point of view, than producing an EV that has 600bhp and can put in a decent lap at the Nurburgring. The Corsa also has history on its side and in a market that is soon to be swamped with new cars from new brands, that could be crucial to success. 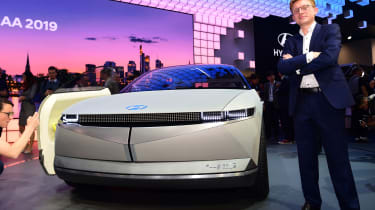 Remember when the Honda e broke cover as the Urban EV Concept? The reaction to Honda’s retro-futuristic little electric runaround was overwhelmingly positive, only confirming to the brand’s executives that they should greenlight the project and try and get it to market with as few changes as possible.

Perhaps that’s exactly why Hyundai bosses are now thinking they should adopt a similar tack with the 45 Concept. It’s the latest concept car to emerge with a clear nod to its maker’s past but a clear path to production too, and is likely to transform into an all-electric compact SUV inspired by the Hyundai’s very first concept car - the Pony Coupe from 1974. I’m personally a huge fan of this new movement of retro-futurism seeping into modern car design, so the 45 can be filed right alongside the Honda Urban EV and the Fiat Centoventi as brilliant looking showcars I can’t wait to see in finished form. 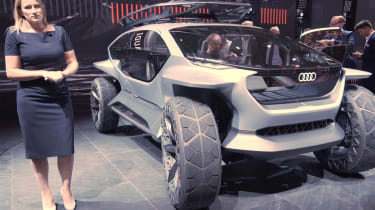 I miss the more flamboyant concepts that we use to see a lot of at motor shows, and the Audi AI:Trail really grabbed my attention. It’s whacky but not without relevance in the design cues and materials hidden in the super-machismo that could trickle down to production SUVs.

Not only that, but I like the way Audi has illustrated the potential breadth of character and purpose that can be achieved with electric cars in the quartet of AI concepts. Running from luxury coupe to city car to race car, they prove a point to those who fret about battery cars being anodyne or just all a bit too similar. On top of that, the AI:Trail gets headlights on a detachable drone that can fly ahead of the car to light the road, and that sort of indulgent tech eccentricity and sense of humour is always fun to see.

What was your favourite car of the 2019 Frankfurt Motor Show? Let us know your thought below...