The latest videos from the 2014 Geneva Motor Show 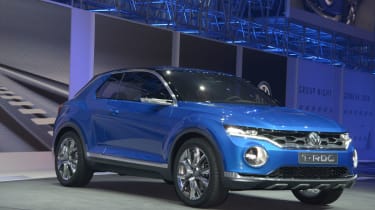 Looking for the best video content from the 2014 Geneva Motor Show? Well, you've come to the right place! We've filmed the hottest new concept cars and production models at this year's show and you'll find all our exclusive videos right here.

Scroll down the page for our Geneva Motor show videos and visit our live Geneva Motor Show page for all the latest coverage from the show...

Named after one of the founders of Maserati, the Alfieri was introduced to Geneva Motor Show crowds by CEO Harald Wester, who proclaimed it “the future of Maserati.” It remains a concept but Wester said: “We are currently considering whether this car could be put in to production.”

The BMW 2 Series Active Tourer - BMW’s first ever front-wheel-drive model - has been revealed at the Geneva Motor Show 2014. Despite its name, the AT is unrelated to the 2 Series Coupe, using the same platform as the new MINI instead. BMW has extended the wheelbase, though, to a more family-friendly 2,670mm – that’s 30mm shorter than the Mercedes B-Class.

A new facelifted Ford Focus has made its debut at the Geneva Motor Show. With some changes to the look of the car, as well as upgrades to the in-car technology and interior, this new Ford Focus is ready to rival the latest Volkswagen Golf.

Honda is about to up the hot hatch game with the new Honda Civic Type R. The Japanese manufacturer has just unveiled its radical new performance model in concept form at the Geneva Motor Show. We can expect to see the production version of the Civic Type R later next year.

The new Mercedes S-Class Coupe will go on sale in November 2014 at a price starting from around £100,000. With a price tag like that it's got to have some appeal - and it certainly seems like it's going to be great. Check out our exclusive video from the Geneva show to find out why:

Audi teased the aesthetic of the new TT with the Allroad Shooting Brake in Detroit, and with the spy shots of pre-production TT prototypes, we had a pretty good idea about how the all-new model would look like. Now the third-generation TT is out in the open though and our exclusive video is below...

The famous Toyota, Citroen and Peugeot city car triplets were reborn at Geneva 2014. The Citroen C1, Peugeot 108 and Toyota Aygo all share a platform but these days they're looking remarkably different. Check out our video comparing the three new cars...

This is Jeep’s new baby SUV, called the Renegade. It has just been unveiled at the Geneva Motor Show, with the new model marking the brand’s entry into the small SUV segment. It faces some tough opposition in a crowded market, tackling the likes of the Renault Capture and Peugeot 2008 head on.

We already know the four-wheel drive 602bhp Lamborghini Huracan’s performance will be sensational. The 0-62mph sprint takes 3.2 seconds (0.2 seconds faster than the Ferrari 458 Italia, but 0.2 seconds slower than the new McLaren 650S), 0-125mph takes 9.9 seconds and top speed is 202mph.

The three-door Volkswagen T-ROC concept has surprised Geneva Motor Show visitors with its radical styling. Its large, round headlamps echo the Nissan Juke’s, while the high-mounted honeycomb grille and lower sill guard create the feeling that this four-wheel-drive car could excel off-road...