Can the Porsche Panamera Sport Turismo Turbo see off the Mercedes-AMG E 63 S in a 4WD estate battle? 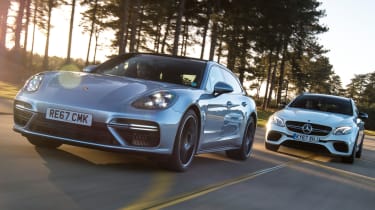 If you’re a petrolhead looking for a mix of ultimate performance and family-friendly practicality, cars like the new Porsche Panamera Sport Turismo Turbo and the Mercedes-AMG E 63 S Estate fit the bill.

The Sport Turismo retains the standard Panamera’s basic formula: it’s a fast, comfortable and spacious car, but adds an extra touch of practicality and style with the bigger boot and longer roofline.

Meanwhile, the Mercedes-AMG E 63 S Estate is more of a conventional load-lugger in design, but this is the hottest version yet, boasting supercar levels of performance.

Both cars use twin-turbo 4.0-litre V8s and four-wheel-drive transmissions, but can Porsche’s newcomer defeat the Mercedes? 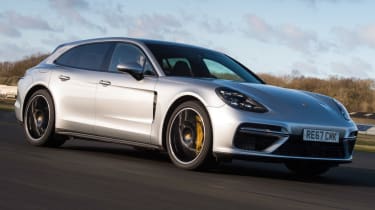 For: Smooth powertrain and great traction from four-wheel-drive system, excellent performanceAgainst: Not as practical as its rival, expensive, middle seat in rear is for occasional use

The standard Panamera is Porsche’s take on a practical, comfortable sports saloon. But this new Sport Turismo version means it’s finally able to cut it with a genuine hot estate like the Mercedes-AMG E 63 S, thanks to its extra luggage space and seating for five people – although it’s actually not that much more practical than the regular car.

It’s also not as powerful as the E 63, with 542bhp to the Mercedes’ 604bhp. Yet in our performance tests, the Porsche’s superb PDK transmission with its amazingly effective launch control system and a slightly lower kerbweight ensured that the two models were very close.

The Porsche took just 3.2 seconds to go from 0-60mph, a tenth faster than the more powerful Mercedes. Both cars are staggeringly quick from a standstill, but the Panamera’s launch control gives it a slight initial advantage. Going through the gears, the Porsche took just 2.4 seconds to accelerate from 30-70mph, again a tenth quicker. 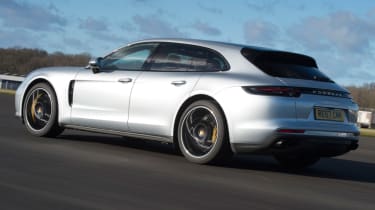 But the Mercedes’ extra power helped it beat the Panamera at higher speeds, and in-gear. From 50-70mph the AMG was faster in every gear, although that’s also partly down to the extra ratio over the eight-speed Porsche.

Yet the Panamera’s PDK transmission is faster and smoother-shifting whether you’re pushing hard or just driving normally. The Mercedes’ extra torque means its performance is more effortless, but the Porsche’s V8 engine is hardly lacking here, and only feels marginally less muscular, while the motor’s flatter rumble gives it a different personality to the AMG.

The Panamera’s air suspension is softer and more compliant than the AMG’s, but controls roll just as well. Where the E 63 crashes into potholes and constantly vibrates on a motorway, even with the adaptive dampers set to Comfort mode, the Porsche is comfortable enough on a poorly-surfaced road, despite the fact our car was wearing larger 21-inch alloys than the AMG’s 20s. 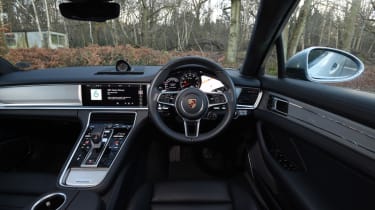 Toggle the three-stage adaptive dampers to Sport+ and the chassis feels more agile (helped by the £1,536 rear-axle steering) and better tied-down, but on the road the softest setting is just right.

The clever chassis tech means the Panamera doesn’t feel its 2,035kg weight. The steering has a lovely weight and there’s enough grip to drive the car quickly with confidence. Although it’s not as playful as the E 63, the sophisticated four-wheel-drive system means the Sport Turismo Turbo is still a great driver’s car.

• Infotainment: Large 12.0-inch high-res display screen looks great. Interface is easy to understand, but Mercedes’ system is better to use when on the move• Technology: The Panamera’s cabin is loaded with standard kit, including twin 7.0-inch screens in dash. Functionality is great; Apple CarPlay and Android Auto are included• Comfort: The front seats are beautifully trimmed and very comfortable. The driving position is brilliant as well 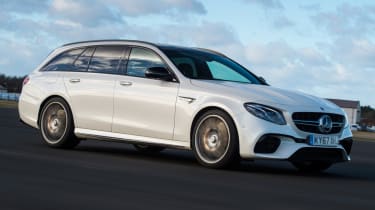 The Mercedes-AMG E 63 S feels more like a hot rod with a boot thanks to its massive power output. But it still delivers impressive handling to match the Porsche Panamera’s abilities as a cross-country cruiser.

There’s a marked difference in character between these two cars, despite their similar bodystyles, performance and turbo V8 engines.

The E 63 driving experience is dominated by the engine: it starts with a purposeful flare of revs and, with a push of a button, you can open up the £1,000 AMG performance exhaust to turn up the volume further still. Put your foot down and the V8 truly comes to life, cracking and popping on the overrun and unleashing the E 63’s brawny personality. It’s much noisier inside and out than the Panamera’s more restrained, but still muscular, V8 sound. 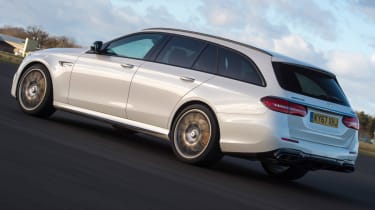 The performance is there to match the engine, too: while the Mercedes wasn’t able to keep up with the Porsche off the line, it’s faster in-gear. It took 2.1 seconds to cover 30-50mph in fourth, which was half a second faster than the Panamera, while it easily had the measure of its rival from 50-70mph in the taller ratios.

This is partly thanks to an extra ratio in its gearbox to cover a similar speed range, and partly due to its power and torque advantage. Both of these points are highlighted best by the 50-70mph time in seventh gear: the Mercedes took 4.9 seconds and the Panamera 9.5 seconds.

However, there are more factors than just performance here. The stiff suspension means the E 63 is far less forgiving than the impressively compliant Porsche over the same surfaces. Even with the dampers in their softest mode the Mercedes is too stiff, fidgeting and thumping over bumps and ridges. Sport and Sport+ modes are even firmer and rarely suited to British roads. 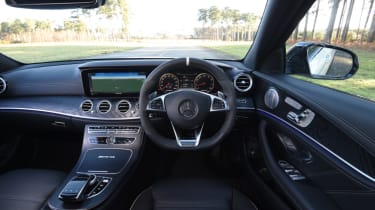 The steering is weighty, precise and gives a good connection to the front axle. There’s a great level of grip for such a heavy car (2,070kg) and the advantage of that firm suspension is impressive body control, so it remains flat as it takes corners with amazing agility.

Inside, the E 63 is similar to a normal E-Class Estate, but with sporty AMG touches, including a set of special sports seats. The twin 12.3-inch display screens are standard and look great, and include Apple CarPlay, Android Auto and sat-nav. The extensive level of kit matches that of the Panamera, while our test car was also equipped with wireless charging (£250). 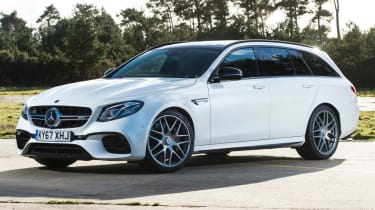 The E 63 S has performance to match genuine supercars, and is more practical than the Porsche. It trails on quality, and isn’t as comfy or refined, but the blistering performance, more affordable price and much more manageable running costs see it take the win. 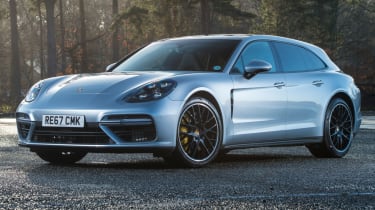 The Panamera Sport Turismo Turbo may be better to drive, but its remit as a performance estate isn’t as broad as the E 63’s. It doesn’t offer much over the regular Panamera and costs a lot more than the AMG to buy and run, even if its top-quality cabin is full of advanced tech.

Enjoyed this head to head of the Porsche Panamera Sport Turismo? Then take a read of when we put the standard car up against the Tesla Model S.