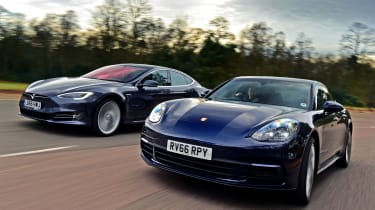 The automotive landscape is changing, with diesel power coming in for some heavy criticism recently. However, in big luxury cars there’s no doubt diesel power still makes sense.

Porsche certainly thinks so, as its new Panamera 4S Diesel delivers as much on-paper performance as you could want from a four-seat luxury four-door. In fact, according to Porsche it’s the fastest diesel production car currently on sale.

However, in 2017 there’s another option if you want pace, space and grace without the running costs of a large petrol. The facelifted Tesla Model S, tested here in P100D form, proves this, and is one of the world’s fastest electric cars. But in a head-to-head battle between these models, which is best? 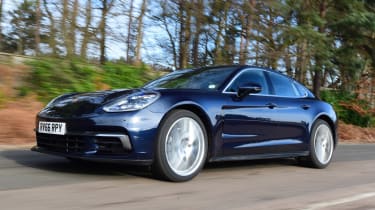 For the time being, the £93,379 4S Diesel is the only diesel-powered Panamera in the range. Under the bonnet, the 4.0-litre twin-turbo V8 is new and produces an impressive 416bhp – more even than a 911 Carrera S. As well as plenty of power, it has a healthy 850Nm of torque that’s served up from a lowly 1,000rpm and doesn’t let up until 3,250rpm. Peak power kicks in just after this, and is sustained until 5,000rpm.

Diesels usually struggle at higher revs, but the Porsche’s engine feels so muscular and continues revving in a linear fashion higher up the range, emitting a muted V8 rumble. With a new eight-speed PDK dual-clutch automatic gearbox, launch control and four-wheel drive, the Panamera’s performance is stunning. It sprinted from 0-60mph in 3.9 seconds, while its in-gear acceleration was similarly spectacular, even compared to the instant torque of the Tesla. 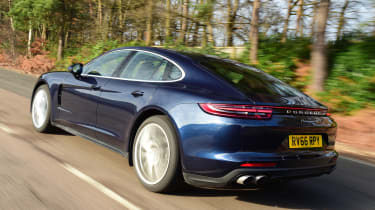 There’s so much that’s new about this second-generation Porsche Panamera that very little is carried over from its predecessor. Porsche’s 4D Chassis control system integrates all the tech on offer, so the way this 2,050kg four-door drives is scarcely believable. Our car featured Porsche’s £1,604 adaptive air-suspension. The Panamera rides nicely, but with 21-inch alloys, even with the dampers in their softest setting you can still feel niggly wheel movement over small bumps. However, at higher speeds the chassis soaks up the worst the road can throw at it with convincing composure.

The slightly firmer edge to the ride is worth putting up with given how agile the car is, though. Our model was also fitted with rear-wheel steering (£1,536), which effectively shortens the Panamera’s wheelbase in slower turns for increased response and lengthens it in faster corners for more stability.

The steering has just the right level of weight and feedback, while the grip and traction would embarrass some sports cars. Plus the Panamera has real poise and balance for such a big, heavy car. 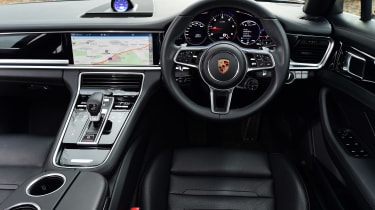 Taut body control aside, the Porsche switches to a luxury limo when you move from Sport Plus to Comfort mode, and the interior comes into its own. The 12-inch touchscreen is clear and digitally controls the movement of the central air vent. This might seem gimmicky, but the level of connectivity isn’t, with apps and smartphone programmes on offer.

The console is no longer festooned with buttons. Instead, the touch sensitive glass panel is flush, adding an even more hi-tech feel combined with the twin high-resolution screens either side of Porsche’s trademark central rev counter.

Infotainment: Centre console is dominated by Porsche’s 12-inch touchscreen, which boasts clear graphics and connectivity.Design: Fiddly buttons are gone, with a clean and logical layout chosen for the Porsche’s interior.Steering and drive: Steering has a balanced mix of weight and feedback, with great grip and traction, too. Car is agile, with a slightly firm edge to the ride. 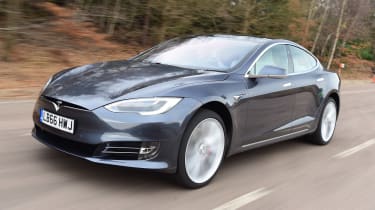 If you’ve not driven an electric car before, then you’ve never experienced the instant power an EV delivers. However, nothing can prepare you for the punch of the P100D’s dual electric motors – you’ll be left stunned at the performance on offer.

This most powerful Model S comes with Tesla’s Ludicrous Plus power upgrade, which puts 603bhp to the road through all four wheels. However, like the Porsche, it’s the torque that takes your breath away. Despite the Model S’s hefty 2,242kg kerbweight, acceleration is rapid, thanks to the 967Nm on offer. In order to extract maximum performance, you have to go through a lengthy process of pre-heating the battery pack, which can take up to an hour. 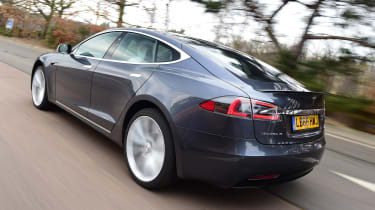 Time constraints meant we weren’t able to fully test the car in Ludicrous Plus mode. However, even in the regular Ludicrous mode, the Model S still sprinted from 0-60mph in 3.0 seconds, helped by the convoluted launch control procedure.

The Tesla accelerated from 30-70mph in a startling 2.4 seconds, which was a full second faster than the Porsche, partly because the Panamera has to shift through gears, whereas the Tesla’s electric motors don’t have any ratios.

However, the Model S’s mass means it can’t match the Porsche in the bends. The steering is light and doesn’t weight up or offer much feedback, and it also doesn’t grip quite as hard. Even if you delicately squeeze the accelerator out of corners it triggers the traction control, so it actually limits performance until you’re in a straight line.

You also feel the car’s weight when braking, and despite the regenerative effect from the motors, it doesn’t feel as stable as the Panamera. Nor does it yield to tricky surfaces as well as the Porsche, thumping over bigger bumps despite its air-suspension. There’s also a lot of road noise. 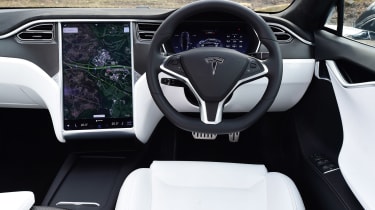 With no combustion engine to drown out wind and road noise, you hear more on the move, but despite a less sophisticated feel to the way the Tesla rides, it still offers a decent level of comfort.

No engine brings big benefits for packaging. The cabin is spacious, and with no transmission tunnel there’s plenty of storage below the enormous 17-inch touchscreen – plus, there’s good legroom in the back for the passenger in the middle seat.

Like Porsche’s £2,438 InnoDrive autonomous driving system, Tesla’s Enhanced Autopilot option will control the car, adapting to traffic around it and keeping the car within its lane. However, its £5,000 price more than cancels out the £4,500 Government Plug-in Car Grant. Even without that option, the top-spec Model S is a hefty £129,400.

Technology: Huge 17-inch touchscreen dominates the dash, and acts as the car’s control centre.Steering and drive: Acceleration is smooth and speedy, but car’s weight means it’s more enjoyable on straight roads than in corners.Styling: Some parts of the interior feel plasticky, but leather details  and metal inserts add a more luxury feel. 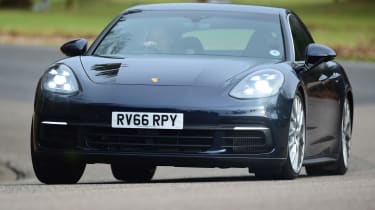 The Panamera lives up to its promise in the UK. It’s packed full of tech, rides better, is more agile and offers even more refinement then the Tesla. It’ll be more expensive to run, but it’s cheaper to buy, and offers incredible performance and competitive efficiency in a complete package. 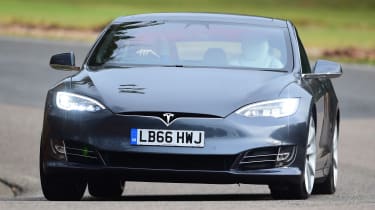 The P100D is an engineering triumph, and its performance always staggers. While running costs might rival a hot hatch and its performance a hypercar, it’s not as complete as the Panamera. You get lots of kit, but build quality isn’t as good, and while it’s larger it doesn’t feel as luxurious or refined