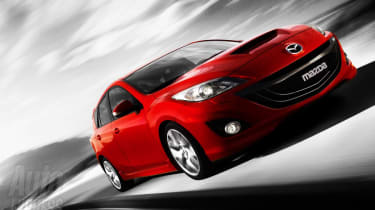 The red-hot new Mazda 3 hasfinally broken cover. These are the first official images of theflagship MPS, ahead of its debut at next month’s Geneva Motor Show.

Ituses the same 256bhp 2.3-litre turbocharged engine as the existingmodel – and offers a 0-60mph sprint of 6 seconds and a top speed of155mph. Only the imminent 301bhp Focus RS has more power in thefront-wheel-drive hot hatch class.

The fresh shape of thelatest 3 has been beefed up with a Subaru Impreza-style bonnet scoop,deeper front and rear bumpers, a prominent boot lip spoiler and twinexhausts.

Even though it provides near-identical performance to the outgoing car, the new flagship will deliver improved economy, as well as emissions that meet Euro V regulations. This is due to subtle engine tweaks and a marginally lighter kerbweight.

Alsoat Geneva will be an i-stop version of the 3. It has a 148bhp 2.0-litreDISI petrol engine with a stop-start system, cutting emissions by 12per cent to 161g/km. The green set-up is due to be fitted across therange in the coming months.