Sharpened up Clio arrives with an all-new look and a hot GT model... 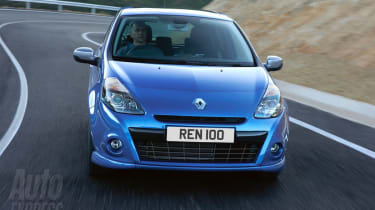 ake a look at Renault's newfamily favourite. This is the facelifted Clio, which has been revealedhere for the first time in sporty new GT guise.

The refreshed supermini lands in May with a face to match that of the new Megane and Laguna, lowering the main radiator grille below the bumper to give it the same sleek look as its bigger brethren.

TheClio outsells the next most popular Renault by two to one in the UK,but last year sales fell by over a third compared to 2007. The new GTwill help stem the losses by creating a bridge between the rampantRenaultsport hot hatches and the more sensible models below.

Noengines have been announced, but we’re expecting to see the 138bhptwo-litre petrol and the highest power 1.5-litre diesel under thebonnet.

The GT’s suspension will be stiffer and lower comparedto the regular Clio and you’ll spot plenty of visual clues to itssporting pretensions, including extensions to the sills and lowergrille, and twin exhaust pipes. Inside, the seats loudly proclaim theGT status and there’s also drilled aluminium pedal covers.

Meanwhilethe whole range comes with the option of cut-price in-built sat nav.Thanks to a tie-up with TomTom, the usually steep bill has been slashedto “hopefully well below £500”, according to a Renault spokesman.

Thefixed system can be updated on-line via a removeable SD card and itcomes with traffic warnings, speed camera locations and speed limitinformation. Engines are expected to follow the current line-up,dominated by the 1.2 petrol and 1.5-litre diesels. Only the lowerpowered diesels fall into the £35 band-B tax bracket at the moment, butthat could change with the launch of the new model.

New interiortrims will be offered, but any owners of the current car looking toswap will be hoping Renault has cured the misting problem highlightedby several Clio III drivers.