We drive Citroen's latest crossover vehicle to see if it fulfils the desirability its name suggests. 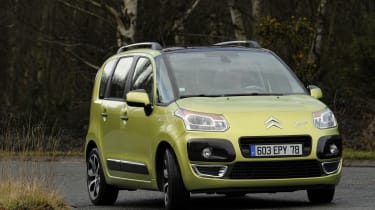 If there’s one thing Citroen knows how to do well, it’s people carriers. And the C3 Picasso is another brilliant example. It’s incredible how the firm has managed to make such a small car so amazingly practical – yet so good looking too. Okay, so on the move it isn’t particularly entertaining but that’s not the point – the C3 Picasso isn’t just about the driver. It’s the passengers who are equally important and they’ll appreciate the comfort and quiet. Factor in loads of personality, practicality and sheer value for money and you’re looking at the new class champion.

Is the car you’re looking at another French masterpiece? Sketched, and built, by Citroen, it's described as a baby brother to the C4 Picasso.

Called the C3 Picasso, it’s aimed at Honda’s Jazz, Renault’s Modus and Nissan’s Note. The little Citroen has the forthcoming Meriva from Vauxhall to contend with too.

But buyers have always loved the styling of the C4 Picasso and to our eyes the C3 looks even better. With a shape made up of rounded-off cubes mixed with neat details like big, bold headlights and brightly-coloured high-mounted taillights, it’s cuter yet more individual than its rivals.

Look at its short bonnet and SUV-style bumpers you can see hints from the original C-Cactus Frankfurt concept as well, while the wide stance and chunky wheel arches give it a sporty look too.

Inside, the success story continues. Lessons learned from the C4 Picasso have been applied to the C3 Picasso with a panoramic glass roof that stretches over driver and passenger heads, giving them an amazing view while letting lots of light in.

Like the C4 Picasso, the main instruments are set in a large digital centre stack and the dashboard is made from high-quality soft-touch plastics. Quality may be patchy below eye level, but there have been improvements over the C4 – gone is the over-complex fixed hub steering wheel, while the feel of the indicators is sturdy and side visibility is even better thanks to very thin A-pillars.

But is it practical? Undoubtedly. At just over four metres long, the C3 Picasso is similar in size to a five-door Ford Fiesta but packs in an amazing amount of space. Headroom up-front is class-leading but it’s in the back that the C3 Picasso really shines. There’s a rear bench that slides backwards and forwards, making it easily possible to have two six-footers sitting behind each other.

What’s more, at 500 litres, the boot is vast and you can also fold the rear bench flat too, creating a load space of 1,506 litres. Factor in a front seat that folds flat as well, giving a load length of 2.4m, plus a twin-height, removable boot floor and the C3 Picasso has every practicality box ticked.

Four engines will be available from launch, but it’s best to ignore the lacklustre 95bhp 1.4 and 120bhp 1.6 petrols, just head for the 92bhp and 110bhp 1.6-litre HDI diesels instead - these offer plenty of shove, great refinement and fuel economy. Pick of the bunch is the lower powered unit. The 110bhp version may be quicker but it’s only available on the flagship £15,595 Exclusive model, while the 92bhp unit is still responsive and kicks off at just £12,595 in VT trim.

It’s a shame that, like the rest of the engine range, it’s hooked up to Citroen’s notchy five-speed manual gearbox – and we’ll have to wait until 2011 for a new six-speed ‘box to arrive, along with a stop-start and a robotised semi-automatic manual transmission too.

On the move, it’s clear the driving experience isn’t biased towards having fun. But that’s no bad thing. The C3 Picasso may not have the sharp steering or firm suspension of a Ford Fiesta but it soaks up bumps well and is capable of travelling quietly at high speed in real comfort.

Indeed, the C3 Picasso feels like a very grown-up machine – and a very well thought-out one too. A masterpiece? Not quite, but there’s no more practical or stylish small car on the market right now. Well done Citroen.

Rival: Nissan Note When it arrived on the scene in 2006, the Note stole the show with its sharp driving experience, removable boot floor and sliding seats. Lately it’s received a facelift to brighten up its looks, but next to the fresh new C3 Picasso, it’s lacking the showroom desirability the Citroen has in spades.