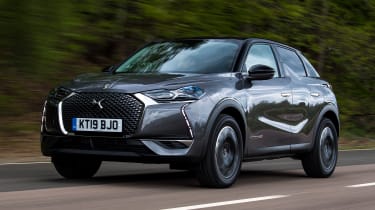 Unlike so many cars in this class, the DS 3 Crossback has been developed with comfort put ahead of sportiness. Sadly though, the DS’ soft suspension set-up isn’t very well judged. Lumps and bumps around town are soaked up, but bigger imperfections are not very well handled. It’s not hopeless on a twisty road, but corners see the DS 3 exhibit a bit too much body roll, while braking and acceleration cause far too much pitching for a modern car. The DS 3 Crossback would be good for those whose driving is confined to rough city streets, but faster driving isn’t a forte. The softer set-up works well on the motorway, however, proving smooth and refined.

Elsewhere, the steering is light but entirely devoid of feedback; there’s a decent amount of grip but it’s very hard to tell how much is left in harder cornering.

The good news is that the DS 3 comes with a range of decent engines. Our pick of the bunch is the PureTech 130, the most powerful version of the turbocharged 1.2-litre petrol engine. With 129bhp and a standard eight-speed automatic, there’s always plenty of power on tap; our tests revealed in-gear acceleration in third and fourth gears that was demonstrably stronger than that of a MINI Countryman with a 134bhp 1.5-litre three-pot. The engine feels eager and doesn’t need to excessively change down through its gearbox thanks to a good spread of ratios.

There are three petrol engines and one diesel available in the DS 3 Crossback. A 1.2-litre turbocharged petrol features in the PureTech 100, PureTech 130 and PureTech 130 – these come with 99bhp, 128bhp and 153bhp respectively. The entry-level 99bhp model only comes with a manual gearbox, while all others get an eight-speed auto. 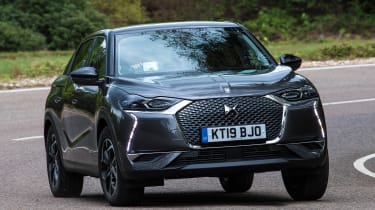 The only diesel option is the BlueHDi 100, available exclusively with a six-speed manual gearbox. 0-62mph takes 11.4 seconds.