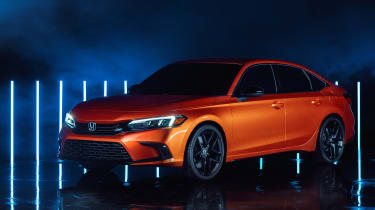 Honda has revealed a prototype version of the eleventh-generation Civic ahead of the car going on sale in spring 2021. Shown as a saloon, this specific model isn’t expected to arrive in the UK but a hatchback equivalent that shares all of the saloon’s main styling features and technology will.

The Japanese brand’s latest family car will be slightly longer and wider than its predecessor, in an effort to fill the gap left by the recently discontinued Accord. It’ll also face-off against some stiff competition from rival brands, acting as a fresh alternative to the new Skoda Octavia and the Mk8 Volkswagen Golf.

Honda has also confirmed that following the launch of the Civic saloon in the US, there will be a performance-focused Civic Si and a high-performance Civic Type R. Both are expected to make it to the UK.

The overall look of the latest Civic has been toned down compared to today's model. The angular bodywork of the current car has made way for much softer surfacing in a move that’s designed to broaden the car’s appeal on a global scale. 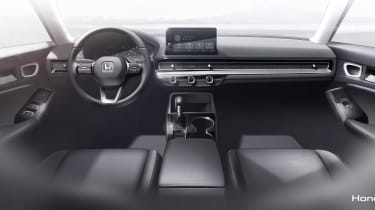 The redesigned front end features slender LED headlamps and a slimmer front grille, while the lower section of the front bumper has been simplified with a single air intake that stretches the full width of the front bumper. The glasshouse has also been shifted rearwards to lengthen the bonnet and give a “more premium side view”, as Honda puts it.

It’s a similar story at the back, where the sharp angles and low bumper design of today’s Civic have made way for a far simpler and smoother look.

Honda has only issued an illustration of the 2021 Civic’s new-look cabin, which, like the exterior, has been redesigned with an eye on keeping things simple; a new nine-inch touchscreen infotainment system appears on top of the dash along with a new digital instrument cluster behind the steering wheel. It also appears that Honda has resisted the temptation to remove all of the physical buttons from the cabin by keeping a small climate control console just below the screen.

No technical information on the Civic has been issued, but Honda has previously confirmed that it will electrify its mainstream European line-up by 2022. Although the brand has yet to confirm how the new Civic will meet that goal, a potential option is for Honda to use a modified version of the Jazz’s innovative e:HEV powertrain – something which the brand has hinted at in previous briefings.

Tom Gardner, Senior Vice President, Honda Motor Europe, told us: “This shift to electrification will change the face of our model line-up considerably. Our two-motor [e:HEV] hybrid technology will be spread across the model range and we will bring further battery electric products to the market.”

Production of the next-generation Honda Civic will also move from the car’s current home at Swindon to one of Honda’s other global factories, likely in Japan. Honda is due to close its Swindon production facility in 2021, around the same time as the Civic is expected to go on sale in the UK.

What do you make of the new Honda Civic? Let us know in the comments section below…

The Ford Focus is a great-handling family hatchback that matches is rivals on interior quality and cabin space.
New Dacia Sandero keeps cheapest car crown with starting price of under £8k 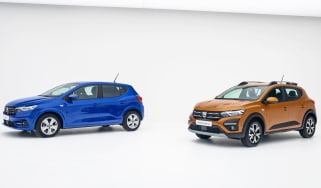 The fourth-generation Dacia Sandero has retained its place as the UK’s cheapest new car, with a starting price of just £7,995