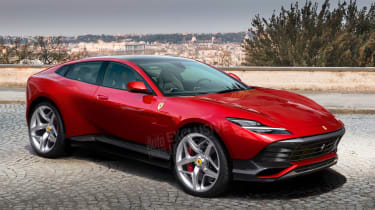 Ferrari will soon launch the Purosangue SUV – and the car that is rapidly becoming the most controversial vehicle in the Italian firm’s 91-year history. When it goes on sale next year, the Purosangue will go head-to-head against a growing number of ultra-premium SUVs, such as the Aston Martin DBX and Lamborghini Urus.

Ferrari recently confirmed that the new Purosangue will be based on the same platform as the Roma GT. Michael Leiters, Ferrari’s Chief Technology Officer explained: “In general we will have two families of architecture – front- and rear-engine families. The modularity is there and, especially on the front-engined architecture, we have to foresee many more models. We have a 2+2, we have a 4+, we are thinking about Purosangue, and so on.”

The design of the Ferrari Purosangue is previewed by our exclusive images – and it certainly features elements of the Roma GT, retaining the grand tourer’s dramatic lines, long bonnet, short tail and flared haunches. The front of the SUV will likely use a more conventional grille than the Roma, although there’ll still be plenty of intakes to maximise engine cooling.

The images also suggest that the Purosange will adopt a three-door layout, with a single half-door behind the driver for rear-seat passengers, allowing the carmaker to claim the car is more firmly rooted in Ferrari’s heritage rather than simply belonging to the mass-market trend that has seen millions of SUVs sold worldwide. 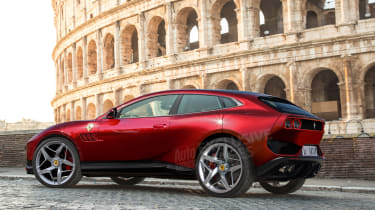 At the rear, the tailgate could more closely resemble that of the GTC4Lusso than the Roma. A more practical tailgate would make the Purosangue more usable, with increased boot space – which are factors not usually at the forefront of a Ferrari engineer’s mind.

The new Purosangue could well feature a plug-in hybrid powertrain, similar in design to the unit found in the SF-90 Stradale, with Leiters stating that the SUV’s platform is capable of housing either V6, V8 or V12 engines.

However, we expect it’ll be the former two units that are the most likely to receive electrical assistance. Ferrari will continue to develop its 6.5-litre V12 engine independent of hybrid drive, as combining such a heavy combustion engine with an even heavier electric motor and battery pack is not favoured by the company’s engineers.

Ferrari’s Chief Marketing Officer, Enrico Galliera, told Auto Express: “To be honest, electrifying a V12 means creating – very probably – a heavy and big car. So electrification ideally should be coupled with smaller engines. The philosophy is to try to be ready with different technologies in order to use them with the necessary evolution,” he added. “That’s why we have a wide range of engines: V12, V8 and, in the future, the V6.”

As the Purosangue will share its underpinnings with the Roma, we expect it’ll use the same turbocharged 3.9-litre V8. In the GT, the engine produces 612bhp and 760Nm of torque – which is likely to be a constant across the two models. However, Ferrari could shift away from the Roma’s rear-drive layout, given the amount of extra space available in the Purosangue’s body, moving instead to a four-wheel-drive system.

The new Ferrari Purosangue will make its official debut in 2021. The company’s marketeers have dubbed it an “FUV” (that’s “Ferrari Utility Vehicle”) – and it’ll be targeting the same audience as prospective Bentley Bentayga and flagship Range Rover buyers.

It’ll also be positioned above the Roma GT in the company’s line-up. Given that prices for that car are expected to start from around £190,000, we’re expecting the Purosangue will be priced from £200,000 when orders eventually open.

What do you make of the Ferrari Purosangue SUV? Let us know your thoughts in the comments section below…