The Panda doesn't feel as durable as rivals, while Euro NCAP safety ratings aren't the best 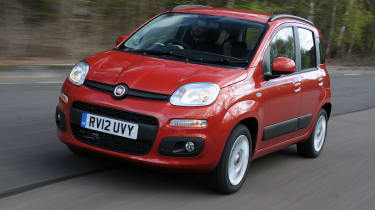 The Fiat Panda scored only four stars in its first Euro NCAP crash tests in 2011, which was disappointing enough in a class of the market where most newcomers achieve the full five-star rating. Part of the reason for this was that ESP was an option at the time of the assessment back in late 2011, but that issue was resolved immediately and the feature became standard on all models in early 2012.

The Panda’s adult occupant and child occupant scores of 82 and 63 per cent in the tests compared with those of the Renault Twingo at 78 and 81 per cent, the Hyundai i10 at 79 and 80 per cent, and the Volkswagen up! at 89 and 80 per cent.

Unfortunately for Fiat, Euro NCAP revisited the Panda in 2018 to show how far crash test safety had come, both in terms of vehicle tech and the requirements of the body's test procedure. This time, the Panda scored no stars at all, while adult and pedestrian scores were in the 40-50% range, while child safety was 16% and safety tech rated at just 7% (although this wasn't a scoring category back in 2011).

Over the years, Fiat has struggled to shed its reputation for making cars with lacklustre build quality and reliability, and the Panda doesn't feel as durable as its immediate rivals. However, as the car is relatively simple from a technical point of view, there isn’t too much to go wrong.

The Panda placed 67th out of 100 cars in our 2019 Driver Power survey, with great feedback on running costs, handling and overall looks. Less positive were responses concerning engines and ride quality, along with woeful scores for the stereo and connectivity. Fiat, as a brand, posted healthy scores - finishing 15th out of 30 manufacturers, sitting comfortably above premium makes such as Audi, Mercedes and BMW.

More recently, in 2020, the Panda didn't make the top 75-car list in our customer satisfaction poll, while Fiat itself dropped to 23rd position out of 30 car makers.

Fiat supplies the Panda with a three-year/60,000-mile warranty, which is pretty average for the sector. However, the Kia Picanto and Hyundai i10 leave it in the shade, offering seven-year/100,000-mile and five-year/unlimited-mile packages respectively. The Toyota Aygo also comes with a five-year/100,000-mile deal.

Fiat offers fixed-price maintenance on the Panda, allowing owners to spread the cost of servicing monthly. Prices vary according to mileage and usage, but should definitely be competitive with city car rivals.