We drive the new Ford EcoSport, Ford's Fiesta-based SUV on British roads for the first time. 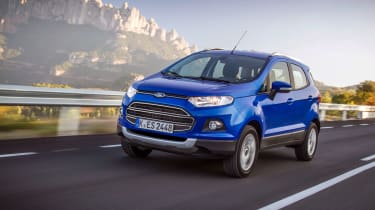 Ford's Fiesta-based EcoSport crossover SUV captures some of the hatchback's charm but unfortunately the styling – particularly from the rear – will divide opinion amongst potential buyers. Efficiency figures are good but Renault and Peugeot have more frugal offerings, while build quality is slightly below par compared to rivals – something the decent dynamics can't fully make up for.

Ford is strengthening its foothold in the booming SUV segment, with the flagship Ford Edge on the way and the baby Ford EcoSport crossover just landing in the UK for the first time.   Entering the industry’s fastest growing market sector, the EcoSport is a small crossover SUV destined to challenge the likes of the Nissan Juke and Peugeot 2008. Ford bosses are also hoping that the EcoSport can translate short term profitability translates into lasting financial success.

• Best crossovers on the market  Selling well in such a competitive market hinges heavily on standing out from the crowd, something the EcoSport achieves in some style. Looking like a Fiesta on steroids, it proved something of a head turner on out test route around Glasgow. The outdated boot-mounted spare wheel no doubt played its part but it's a feature that does age Ford’s baby SUV. Along with the quirky styling, there will be a choice of three engines in the UK. The 89bhp 1.5-litre TDCi diesel, a 111bhp 1.5-litre petrol and the 123bhp 1.0-litre EcoBoost petrol make up the range.

We sampled the £16,495 diesel first, a healthy 204Nm of torque gives the EcoSport good punch in-gear from a standing start. Despite the fairly smooth upshift from the five-speed manual, however, power soon peters out, resulting 14 second 0-62mph time. The TDCi engine is at least refined, going about its business quietly across a range of speeds and offering up to 61.4mpg while emitting 120g/km of CO2.

• Best 4x4s to buy now  If you put driving dynamics ahead of efficiency you’re probably better off with the more powerful 1.0-litre EcoBoost engine. Aside from being £400 cheaper to buy, turbocharged petrol unit is lighter and nippier, resulting in a more engaging, hatchback-like drive. Either way, Ford’s trademark handling prowess is evident. The EcoSport is a little too tall to be entirely composed down twisty B-roads but it holds its line well and responds faithfully, even to larger steering adjustments.

Given the Fiesta-like handling credentials, it’s perhaps unsurprising the ride can be a bit firm over speed bumps and potholes, but overall the suspension strikes the right balance – we certainly had no complaints after a 350 mile slog. Inside, the Fiesta family resemblance is once again evident, and the EcoSport gets a decent amount of standard kit. Only Titanium spec models will be offered to buyers, but, for a further £1,000, a Titanium X pack can be added, which sees full leather trim, 17-inch alloys, cruise control and auto features all fitted as standard. 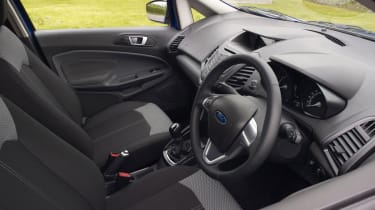 A higher roof and longer wheelbase than the Fiesta help make the EcoSport's interior reasonably spacious. Rear passengers won't struggle for legroom, although three adults will find it a bit of a squeeze side-by-side.

At the back, the boot lid benefits from a well disguised release that's concealed within the right tail light cluster. Unfortunately, making the most of this won't be easy as you need a lot of space to fully open the wide, side-hinged tailgate hatch. With the boot open a low load lip makes for convenient access to the 375-litre luggage capacity, which can be increased up to 1,238 litres thanks to 60:40 split folding rear seats. Sadly they don't quite lie completely flat.

Overall, the cabin feels a little rough around the edges, the leather-trim multifunction steering wheel and seats are comfortable and easily adjusted, yet visibility is hampered by the front pillars and the centre console looks busy and dated.

The optional Ford SYNC with AppLink fitted to our test car did go some way towards making up for the complicated infotainment controls. This adds £250 to the basic price, which kicks off from £14,995.