Can the Ford Focus RS hyper hatch deliver the goods on UK roads? There's only one way to find out...

Not only is the Ford Focus RS great to drive, it’s undoubtedly great value too. The clever four-wheel drive system helps make the most of the 345bhp four-cylinder engine under the bonnet, with a clear focus on driver enjoyment over pure lap times. It’s certainly more fun than rivals like the Audi RS3 and Mercedes-AMG A45, which cost much more to buy, and this Focus RS will join predecessors like the Escort and Sierra Cosworth in the pantheon of great fast Fords.

We’ve already discovered that the Ford Focus RS is one of the best hot hatchbacks in the world during our test on European roads, but a crucial question remains: does it make sense in the UK?

The numbers alone give the RS a huge head start: where else can you find a 345bhp four-wheel drive car that can go from 0-62mph in 4.7 seconds for less than £30,000? Of course it’s not just the huge power that gives the Ford Focus RS massive appeal, but the fact that you can fit the whole family inside and use it every day of the year.

While the latest Focus RS has a much more toned-down look than previous models, there’s still no doubt as to what’s underneath the bodywork. The huge grille and front splitter give the RS an aggressive front end, with bulging wheelarches and an eye-catching wing on the back giving respectful nods to previous hot Fords. 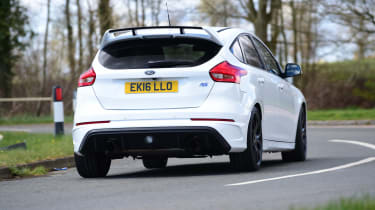 Ford tells us that nothing on the car is just for show, though: the various vents, diffusers and spoilers around the bodywork are there to reduce lift or aid cooling, especially on the race track.

Huge 350mm brake discs at the front provide some serious stopping power but need to be kept cool, and the tweaks to the engine mean a wide intercooler is needed at the front. In fact, when Ford was designing the Focus RS it chose an intercooler that was so big, part of it has to be covered in the production car to keep it from doing too much cooling.

• We ride in the Focus RS with Ken Block

Even the large exhaust pipes, which help extract maximum power from the engine, and the 19-inch forged alloy wheels, which save nearly 1kg a corner, have a functional use on the car. Of course, there’s extensively tuned suspension compared to the set-up on the Focus ST behind those wheels, too. It’s joined by an advanced four-wheel drive system to add both grip and driving fun to the mix. 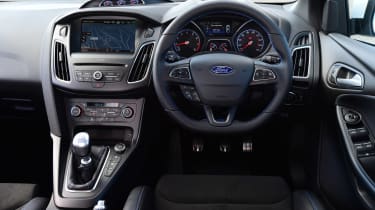 Ford’s four-wheel drive system is adaptive, sending engine torque to the wheel that needs it most. In the majority of situations that means the car stays planted to the road, but the system also enables the inclusion of a special Drift mode that can push the car out of traction using the outside rear wheel, then hold the slide by sending most of the power to the back axle. It also gives the RS more of a rear-wheel drive character despite the Focus’ roots as a front-wheel drive hatch.

There are four modes available to you in the Focus RS: Normal, Sport, Track and Drift. Normal and Sport are suited to the road, with Sport adding extra exhaust noise, throttle response and steering weight. It also enables the rear differential to push 2 per cent harder than the front, giving the car extra urgency when pushing hard.

• A history of Ford's RS brand

Track and Drift modes are best saved for the track, as the latter is designed to send the rear of the car sideways and the former stiffens the dampers significantly. This can be done in any mode using a separate button on the indicator stalk, but there’s no way you’d want to do this on the road: the standard suspension is very firm while still being acceptable, but the stiffer setting makes the average B-road feel like one long cattle grid. 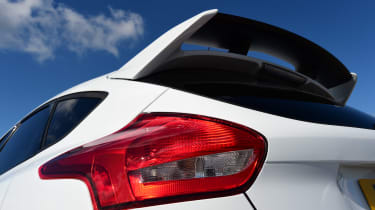 We found the optional Recaro race seats fitted to our test car surprisingly uncomfortable as well, but they certainly provide plenty of support when taking corners quickly - and that’s something you’ll want to do all day in the Focus RS.

The Ford turns into corners sharply, thanks in part to a quick fixed-ratio steering rack. While we’d prefer a bit more feedback from the steering, there are no complaints elsewhere: the complex four-wheel drive system means you can steer the RS on the throttle around a bend, even coaxing out some oversteer if you push hard enough. Clearly, the Drift mode is your friend if you’re planning to do some showboating on a track, but that touch of excitement as you power out of a corner in Sport mode will be available to you much more of the time.

When you’re driving to work, however, the RS feels very similar to a standard Focus. That’s both good and bad, because while the car is composed and easy to drive it doesn’t feel hugely special inside. A few extra gauges, buttons and the sports seats give it a bit of extra appeal but it’s still clearly a Ford family hatch on the inside - and that’s because the RS is built on exactly the same production line as every other Focus. 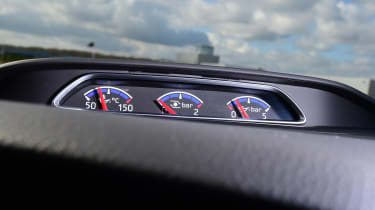 Put your foot down and there’s no doubt as to what you’re sitting in, though: the turbocharged 2.3-litre four-cylinder produces 345bhp and 440Nm of torque, which goes up to 470Nm for 15 seconds on full throttle.

The engine thrives on being in the middle of the rev range, feeling a little hesitant at first before the power builds smoothly as the revs rise. Keep the engine singing and you won’t be disappointed at the results. It doesn’t feel as urgent as the Honda Civic Type-R’s less powerful unit, but it’s smoother and sounds better, despite the silly pops as you lift off the throttle.

The gearbox is smooth and easy to use, if not as satisfying as the excellent Civic’s, but the fact that this car is manual in the first place will delight enthusiasts: it gives you full control over the engine and adds an extra layer of involvement with the car. 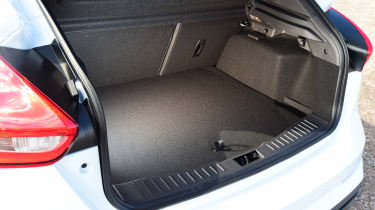 As an all-weather road car in the UK, there’s not much that can come close to the four-wheel drive Ford, though. It’s one of the fastest hot hatchbacks on the road and can offer loads of grip in bad weather as well as a bit of slip when the mood takes you. Plus of course, it’s still a family car: the five-door body means access to the back seats is easy, there’s lots of storage around the cabin and the hatchback boot is a decent shape, if disappointingly small (at 260 litres, compared to the Civic’s 498-litre space).

Economy of 36.7mpg isn’t bad for such a high-performance machine either, and the £29,995 starting price makes this one of the best-value hot hatches there is, if not the best of all. So to answer that all-important question: yes, the Focus RS makes complete sense in the UK, despite the firm ride.