Modern styling and a high-quality cabin boosted the Ka, but infotainment options were disappointing

The domed roofline gave the Ford Ka Mk2 a hint of its Fiat 500 sister car, but that’s about as far as the family resemblance went.

In the main, the exterior is dominated by a sharp, modern look like a shrunken Ford Fiesta. It’s a different design approach to that of the intensely retro 500, and a sharp contrast to the original Ka with its distinctive curves, but it works well enough.

Studio and Edge versions of the Ka didn’t get alloy wheels as standard, but Ford fitted the latter with manual air-conditioning, electric front windows and remote central locking.

Whatever way you look at it, the Ford Ka was expensive for a city car, although Zetec models and above got front foglamps, heated wing mirrors and 50:50 split rear seats for that extra bit of practicality. 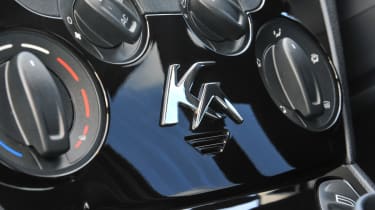 The interior was simple and stylish, with a higher-quality feel than you might expect to find in a city car. Unfortunately, newer rivals such as the Volkswagen up!, Skoda Citigo and SEAT Mii won’t be losing any sleep, and it's a bit of a shame that the radio controls and some of the cheaper materials from the Fiat 500 made their way into the Ka’s cabin.

While many of the latest city cars feature touchscreen options that replicate your smartphone on the dashboard, the Ford Ka remained pretty basic – there wasn’t even a built-in sat-nav option. New drivers especially are likely to be unimpressed that they can’t sync their mobile, read E-mails, check the weather forecast or use mapping.

For buyers who are less obsessed with connectivity, the basic Studio model may well be sufficient. It got a four-speaker radio/CD player with an MP3-compatible auxiliary jack. You need to upgrade to the Studio Connect model if you want Bluetooth, USB connectivity and steering wheel audio controls.