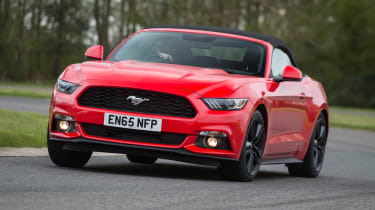 The Ford Mustang Convertible is a different animal to the Fastback coupe. Chopping the roof off has given the Ford a wallowy ride and the kind of soft-edged handling you’d expect from a US sports car. However, once you accept that it’s not the best-handling drop-top money can buy, you can make the most of the performance on offer from the powerful yet refined EcoBoost engine. The Mustang is a great cruiser with the roof up or down, yet the firm suspension means it’s not the most comfortable on bumpy roads.

The all-new Ford Mustang has caused quite a stir in the UK. We’re fans of the coupe here at Auto Express, because it delivers a satisfying driving experience on UK roads at a competitive price. But is the Convertible as attractive as the Fastback version? We tried an EcoBoost model with an automatic gearbox to find out.

First impressions are good, because aside from the fabric roof, the Convertible looks largely identical to the coupe. You get the same retro-modern design, with a smattering of galloping horse logos to remind you of what you’re driving – the only Ford badge of note is on the windscreen behind the rear-view mirror. The interior design, meanwhile, has a pleasingly retro look about it. 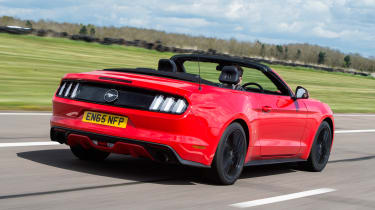 Like the coupe, the Convertible feels like it’s been built down to a price inside, but it’s no worse than a Focus, and it’s easy to overlook its budget feel when you consider how much car you get for your money.

The Convertible range matches the Fastback line-up, so standard kit is generous on EcoBoost models, with 19-inch rims, xenon lights and a large touchscreen.

You unlatch the top with a cumbersome grab handle, then a press of the switch on the windscreen header rail opens the roof in 12 seconds. It closes again in 10 seconds, but that handle needs a hefty twist to ensure the top is latched back in place. Like some rivals, you can open and close the roof while the car is moving, although it can only be done at walking pace. 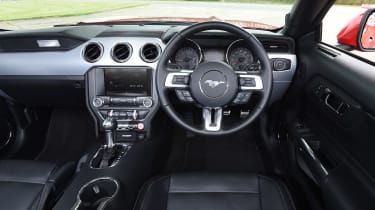 What is impressive is the Mustang Convertible’s refinement with the roof in place. The multi-layer top is well insulated from wind and road noise, and the car is almost as quiet as the coupe at motorway speeds. Electric windows are standard, although there’s a single switch to lower both rear windows, and the fronts don’t open automatically; you have to keep your finger on the switch to open them fully.

Head off with the top down, and at low speed there’s only slight buffeting for taller drivers, yet at motorway speeds, the wind does blow back into the cabin, especially around the seatbacks. There’s no option to add a wind deflector over the rear seats, so you’ll have to put up with the breeze when you lower the roof.

On the move, the EcoBoost engine has just enough power to deliver brisk performance, although with a kerbweight of close to 1,800kg, there’s a lot of car for the four-cylinder turbo engine to haul around. 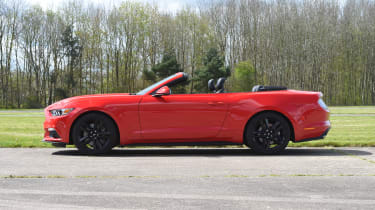 The six-speed auto delivers fast shifts, and while it’s ready to kick down a gear at the slightest prod of the throttle, there isn’t any jerkiness. Put the box into Sport mode, and you can take manual control, but full automatic mode better suits this car’s character.

Unfortunately, lopping the roof off the Mustang has amplified the negatives of the driving experience. Like the coupe, the firm suspension is unsettled by broken surfaces, and the added flex in the body means the whole car shudders and shakes over bumpy roads. Attack a corner, and you can feel the car twist as the suspension loads up, while it squats on to its rear quarters, only to be unsettled again if you hit another bump.

It’s not the most pleasant experience, but at least the steering lets you know what’s going on beneath you. Instead, it’s best to take it easy in the Mustang Convertible, and when you do, the EcoBoost makes a lot of sense.

However, while you get a sound synthesiser that’s designed to add aural drama, it’s pretty insipid when compared with the rumbling 5.0-litre V8 that’s also available across the range.